"One person told me, 'My family just doesn't eat pork -- we're allergic to pork,'" historian Stan Hordes said, explaining the pockets of crypto-Jews who maintain Jewish traditions without even realizing it. (Photo By John Anderson)

Richard Santos is wondering how old you can get and still call yourself an "angry young man." The San Antonio native, author or co-author of 32 books, stands mischievously at the microphone inside a local hotel reception hall, holds forth his middle-aged body, and tells a room full of impeccably dressed Jewish men and women: "You should hear some of the jokes we tell about Jesus Christ!"

Yes, his name is Santos. And yes, his skin is brown. So the reason he's being so ribald with the history of Catholic clerics at the Texas Jewish Historical Society's 22nd annual conference may not be readily obvious. As it turns out, though, this fiery academic's blood is as rich with Jewish heritage as anyone else's in the room today. A descendant of an ethnic group called "crypto-Jews" -- that is, Sephardic groups of families who secretly retained their religion and culture after a 15th-century Spanish royal decree deemed it punishable by death -- Santos has spent his entire adult life trying to educate the masses about the secret history of his bloodline.

"I'm very proud that [my ancestors] chose to be burned at the stake," said Santos, the author of Silent Heritage: The Sephardim and the Colonization of the Spanish North American Frontier, 1492-1600. Since their only other option, of course, was to deny their identities and heritage, Santos' pride is understandable.

But pride has not been easy. Santos is a sort of rebel, after all, who repeatedly calls himself an "angry young man" and speaks without hiding the bitterness in his voice. Endlessly misunderstood and attacked by various groups throughout his life, he is neither what one expects from a Latino nor a Jew. At the conference, though, he is a shining example of both. With his personal drama and long history of academic work -- he has taught at San Antonio's Trinity University and Our Lady of the Lake, among others -- Santos is a walking example of the most fascinating part of this year's gathering. Somewhere between the field trip to the Dell Jewish Community Center and the communal breakfast buffets, speakers like Santos are showing how scholarship and literature can reconfigure public notions of race and identity.

"Nobody taught me that my people signed eight declarations of independence trying to form a national government," Santos said.

All of this may be a little shocking, of course, for the casual attendant who was hoping to mingle with friends and hear a word or two about local Jewish history; after all, there was a panel devoted specifically to Austinites discussing the Jewish history of Austin "from a social perspective." But a quick glance around the room shows that most of the audience is deeply enthralled by Santos' speech -- it's as if they, too, can identify with his anger, sympathize with his life of questioning the meaning of heritage. "Some of the people here think they might be Jews, some are crypto-Jews, and some are your Eastern European Jews," says Walter Cohen, trying to size up the group. Even Santos alludes to the deceptively diverse makeup of the attendants in his remarks. "We have one god and 10 commandments," he said. "Everything else is negotiable."

Perhaps the most negotiable thing today is history. Former New Mexico state historian and University of New Mexico professor Stan Hordes is also in attendance, here to relate his tale of how he found a number of crypto-Jews in and around Santa Fe, many of whom didn't even know they had Semitic ties.

"One person told me, 'My family just doesn't eat pork -- we're allergic to pork,'" Hordes says, explaining the pockets of crypto-Jews who maintain Jewish traditions without even realizing it.

For this fascinating group of crypto-Jews -- women who light menorahs without even realizing what they're doing, for instance -- the story begins in the medieval Iberian peninsula, where an unprecedented harmony existed between the three major populations: Muslims, Jews, and Christians. In what will later be called the Golden Age, each group enjoys extraordinary religious freedom and contributes significantly to the progress and duties of Iberian society. Jewish philosophers and poets such as Maimonedes and Yehuda ha-Levi flourish. Then come Ferdinand and Isabel, the infamous Reyes Católicos ("the Catholic monarchs"). 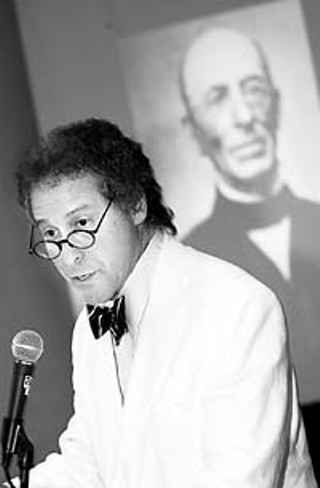 "American Jewish history is one of the most pathetic intellectual endeavors ever," Robert Rosen, author of The Jewish Confederates, asserted at the conference. (Photo By John Anderson)

Beginning with their "reconquista" ("reconquest") of Spain in the name of the church and culminating with the Edict of Expulsion in 1492, the monarchs quickly transformed the peninsula from an area of tolerance to one of terror. The Muslims were driven down into North Africa, and Jewish families were forced to convert to Catholicism or permanently leave the land they'd owned for centuries.

History, however, is canny in its designs. The same year that the monarchs reconquer the peninsula, the same year they sign the Edict of Expulsion, also happens to be the same year that Europe discovers the vast and virginal Americas. While the Catholic forces see the lands as a sudden tabula rasa -- a chance to start anew in their campaign for salvation -- the persecuted Jews see it as a nice place to live without having murderous zealots as neighbors.

Crossing the Atlantic under various pretexts and disguises, the crypto-Jews eventually make their way north of Spain's Mexican settlements, ending up in what is now the American southwest. "The first settlements in this area were established by crypto-Jews escaping the Inquisition," Hordes explains. Officials in Spain, however, soon realize that Jewish practices are thriving in the area, and a crackdown involving autos-da-fe, immolations, and harassment begins in the New World.

For families like Richard Santos' predecessors, the impossible choice appeared again: Convert or die. The fact that Mexican-Americans in the region today practice ghostly echoes of the Jewish cultural and religious habits indicates that they chose a different and more subversive path instead: to continue their existence in private, behind closed doors, away from the inquisitive Catholic eye.

"Many of them [descendants of crypto-Jews] have gotten so angry with me because I told the family secret," Santos says.

Fascinating as the presentation by Santos and Hordes may be, it leaves far more questions than answers. What does it mean for the surviving crypto-Jews to discover their lineage, for instance? Surely the inheritance of these defiant settlers must amount to something more than curious attitudes towards pork and candles.

Robert Rosen, practicing lawyer and author of The Jewish Confederates, offered a slightly more thorough evaluation of a wholly different "crypto" group of Jews during his presentation: those who supported and died for the Southern Confederacy during the Civil War. "The irony of Jews owning slaves is not lost," Rosen said, calling the southerners "Israelites with Egyptian principles."

Armed with a steady sense of humor and forceful energy, Rosen took great pains to establish a sense of historical accuracy for the large group of attendants who had gathered for dinner at the end of the conference. Speaking over the clinking of glasses and forks, he described the antebellum American South as a "Land of Canaan," where Jews enjoyed freedoms and levels of participation in society unheard of since the Golden Age in Spain. That nobody knows about the splendor of old Galveston and New Orleans is not a fact that Rosen takes lightly.

"American Jewish history is one of the most pathetic intellectual endeavors ever," he said.

The facts to support Rosen's image of the South as a haven for Jews are there, though. The first three Jews elected to the United States Senate all hailed from below the Mason-Dixon Line. The very first of these men, Benjamin Franklin Jonas, is so poorly known in American history that Rosen claims there is no biographical essay in any library detailing his life. Additionally, one of the wartime South's most powerful leaders, Judah Benjamin, puts Joseph Lieberman's vice-presidential nomination in a fuller context, as he was third in line to the presidency of the Confederacy a full 135 years before Lieberman's achievement.

However surprising these images provided by the Texas Jewish Historical Society may have been, they demonstrate the urgent need for continued scholarship and publishing that tackles accepted notions of cultural identity. That a man from San Antonio named Santos has as much to add to the world of Jewish intellectual pursuits as an attorney named Rosen is as fascinating as it should be obvious. For the first time, perhaps, an entirely constructive revision may be taking place in the history of those we call the "people of the Book."