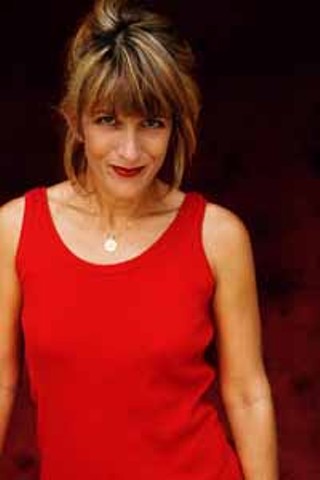 It may seem mysterious that Chronicle contributor Marion Winik, who over the course of several books (Telling, First Comes Love, and The Lunch Box Chronicles) has confessed to doing lots of things she's been told not to do, would write a guidebook for people who find themselves stuck in life. Rules for the Unruly: Living an Unconventional Life (Fireside, $12) may be stocked in the self-help section of the bookstore, but it harbors none of the dopey observations that sometimes emanate from other practitioners of that genre. Marion Winik on why writers depend so relentlessly on punctuation marks: "The other thing I should say about our love of punctuation marks is that they are a symbol of commitment to craft, of our sense of language as something we make things out of, like clay or wool or wood, and our joy in the process of that making, even the parts of it that seem tedious or mundane." Marion doesn't just dole out her advice; she makes it a pleasure to be given the seven rules for the unruly, which include "mistakes need not be fatal," "be gentle with your parents," and "learn to use a semicolon." The book is borne out of the author's experience of being asked to give a speech to the students of her high school's honor society:

Austin Chronicle: In the book you mention that when you went back to your high school to speak that you were looking out at different types of people -- "my poet geniuses, my mad hackers, my eggheads with dreadlocks ... all my little freaks and dreamers out there." Which one of those were you?

Marion Winik: Well, you know that part where the girl is looking down at her fat legs and thinking how could she have ever worn this skirt? And then another one is freaking out because she's pregnant and another one can't believe her parents made her come to this thing? Okay, well I was all those.

AC: Is there an ideal reader for this book?

MW: It grew out of a speech I gave to my old high school and I started out thinking that I was talking to high school kids. Once I sort of experienced that electric thing that happened that night at the talk, and I realized that this was kind of important and powerful and something worth pursuing, and I sat down to write it, my idea expanded. I started realizing, You don't have to be 17. You could be 25, you could be in your 30s. One of the reader reviews on Amazon right now says, "This book doesn't just have to be for people starting out, it could be for those who already took the road less traveled but find themselves at the truck stop of doubt." So I guess I'm now thinking, although I sort of thought that it would be younger people, like people in their late teens and early 20s, I'm now thinking there are plenty of people who would like to hear these things or would like some reassurance and encouragement for choosing some different things. I hope to be talking to people who feel a little excluded or even self-excluded from the dominant definition of success.

Would things have been different for you if you had had a book like this when you were that age?

MW: I feel like when I looked up ahead for people I wanted to be like, all I could see were people that were dead or dying. Like Janis Joplin and Sylvia Plath. And I'm not saying that Marion Winik is going to join the ranks of Janis Joplin and Sylvia Plath, but that's what maybe could make a little bit of progress along those lines. Like give an idea that there's something ... if I had known that there was someone that I thought of as cool who valued the things that I thought were worthwhile, that had made some healthier, less self-destructive kinds of choices, I think it would have been good for me.

As it was, I really got the impression that self-destructiveness was part and parcel of an unconventional lifestyle. That the whole thing -- the drinking and drugs and partying and hurting yourself and having horrible relationships with men and feeling like shit all the time -- was all one big package with being an artist. And like I say at one point in the book, I'm certainly not denying anybody their decadence and their bohemian lifestyle. All these things have a place in a well-rounded biography, but I think it could have helped me if I had had a glimmer of how someone who made it out the other side managed to do that.