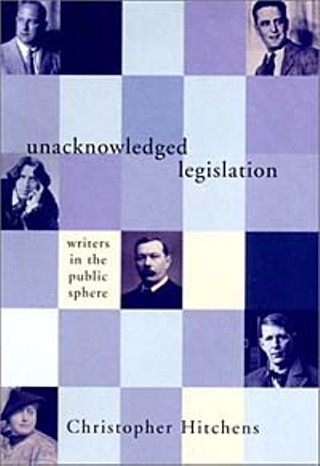 Writers in the Public Sphere

Book reviews by Christopher Hitchens are refreshing for at least three reasons. First, and most basically, Hitchens is smarter, better read, and more brilliantly and subtly acidic than most reviewers. Second, he carries a meaningful point of view through his reviews -- not only about the way literature works, but also about the way the world works. Third, although he is a natural controversialist, he doesn't allow his erudition or his point of view to render him dogmatic in his approach either to books or to ideas.

Some of the 35 pieces here first appeared via Hitchens' day jobs with The Nation and Vanity Fair, but he is also more or less a regular with the New York Review of Books, Critical Quarterly, Dissent, and several other lefty and smarty rags. His range of references, like his prolific output, is so sweeping that it's easy to think he's showing off. In fact, he is showing off. But he also uses his broad knowledge of literature, politics, and history to enlarge his view of books, their authors, and their contexts. In other words, his allusions actually make points rather than merely scoring them.

It is unsurprising that the leftist and deeply political Hitchens would devote considerable space to his friends Gore Vidal and Salman Rushdie, or to men such as Oscar Wilde and George Orwell, who could be taken as paragons of Hitchens' own mix-it-up M.O. But he is likewise capable of sensitive essays on writers with whom he would have strong disagreement -- Rudyard Kipling, H. L. Mencken, and Philip Larkin, for example. And he's at home analyzing the work of writers as various as Arthur Conan Doyle, Roald Dahl, and Andy Warhol. (He is also, by a mile, the best man to call for whipping jackasses like Norman Podhoretz and Tom Wolfe.) This range of coverage is even more notable than his range of allusions.

One does wonder if the man speed reads. Several of the reviews here, at least the way Hitchens has written them, require job-lots of homework. For Oscar Wilde, this isn't such a big matter -- his collected works make for a thick volume, but it is just the one volume. But when we're talking about the letters and journals of Anthony Powell -- which Hitchens reviews with minute reference to Powell's 12-volume novel A Dance to the Music of Time -- or about the whole of Patrick O'Brian's 20-novel Aubrey/Maturin series, the labors become daunting. In his spare time, Hitchens has even become well-enough versed in schlock thrillers that he's able to lacerate dopes like Tom Clancy and Charles McCarry on their own turf.

(Would that his labors had been better served by his editors at Verso -- the typos pile up chapter by chapter. In several of these reviews, Hitchens himself takes writers and editors to task for the mildest solecism. He ought to be alarmed, then, that his own editors at both Verso and the London Review of Books let him confuse Upton Sinclair with Sinclair Lewis. Yikes.)

The title of this collection alludes to Shelley's line about poets as the "unacknolwedged legislators of the world." Hitchens' treatment of the writers here does a good job of locating them in their position as arbiters of what's better and worse in public life. At the same time, it makes yet another clear argument for his own prominence in the same role.