The funny people at Modern Humorist have devised a new way to make fun of the President, and upcoming events in Austin's literary life. 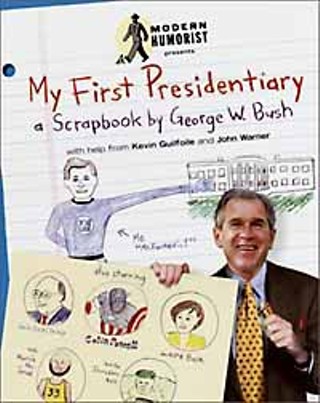 Those funny people at Modern Humorist realize that the George W. Bush stupid jokes have basically run their course, despite all the people who can't stop laughing at them. What would it be like, they wondered, if they made the president really smart -- but also made him nine years old? Thus My First Presidentiary: A Scrapbook by George W. Bush with help from Kevin Guilfoile and John Warner (Three Rivers Press, $9.95), in which we are privy to Bush's overwhelming homework assignments and important memos to his various underlings. Readers of the book may be surprised to learn that the 43rd president writes entirely in crayon and has discovered a secret passageway in the White House from the map room to the library. He has a young pen pal friend in Mexico named Hector and has devised a new medal that he likes to give out: the Vice President's Award for Physical Fitness ("To get it, you only need to do more sit-ups than Uncle Dick"). In a memo to Gale Norton, secretary of the interior, he's sort of chivalrous: "I want to say that I know how you gals hate the word 'secretary' so feel free to put 'Administrative Assistant of the Interior' on your business cards." Maybe the stupid jokes aren't so passé, after all.

Carlos Fuentes will give a lecture as part of the KLRU Distinguished Speaker Series on Wednesday, March 28, at 7pm at the LBJ Library Auditorium. Call 477-6060 for ticket information. He will also be at the Barnes & Noble Sunset Valley store (5601 Brodie Lane) at 2pm that same day… Southwestern University is bringing bell hooks to give a lecture tonight, Thursday, March 22, at 4pm, in the Alma Thomas Theater. For directions to Southwestern (in Georgetown), see www.southwestern.edu/tour/usamap.html … National Book Award finalist and Paterson Poetry Award winner Alicia Suskin Ostriker (The Imaginary Lover, The Crack in Everything) will read from her work in the fourth-floor auditorium of the HRC (21st & Guadalupe) on Thursday, March 29, at 7:30pm… Poet Tessa Rumsey (Assembling the Shepherd) will be at the Katherine Anne Porter House in Kyle (508 Center Street) on Monday, March 26, at 7:30pm. For directions, see www.english.swt.edu/kap/contactpage5.html … Red Salmon Arts presents the third Cafe Libro open mike featuring Rodney Garza, a performance artist specializing in rapoetry, comedy, and monologues. Cafe Libro continues the 18-year tradition of RSA events such as the Eastside/ Southside Poetic Action and Canto Libre series. Friday, March 23, at 7pm at Resistencia Bookstore (1801-A S. First). Signup at 6:30pm. For more information, call 416-8885… Paula Kamen, author of Her Way: Young Women Remake the Sexual Revolution, will be at Book Woman on Saturday, March 24, at 7pm… Dave Parsons will be in Austin to read from Editing Sky, his collection of poetry that prompted Edward Hirsch to state that Parsons writes with "a rugged and forthright honesty, with an open-hearted freshness, with the true voice of feeling. It behooves us to listen." Parsons will be at Barnes & Noble Westlake on Wednesday, March 21, at 7pm.