Speaking With the Angel: Original Stories 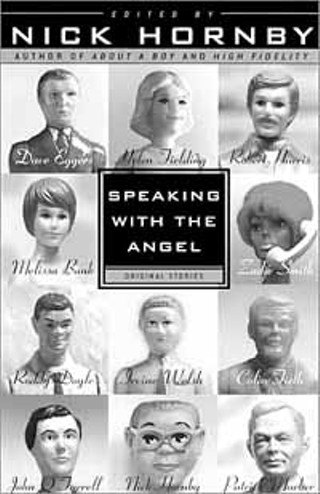 "Oh, I am a fast dog. I'm fast-fast." Steven the dog is telling his story. "It's true and I love being fast I admit it I love it." Steven's story, and it is a magnificent one, is written by Dave Eggers and is titled "After I Was Thrown in the River and Before I Drowned." It pops up about halfway through this vivid collection of first-person narratives, edited by High Fidelity author Nick Hornby to raise money for an autistic school his son attends (Hornby's impassioned introduction is, in itself, a gripping read). Like the collection's best pieces, Eggers' story replaces the excruciating self-reflexiveness and cynicism that has characterized much of literature for the past few years and replaced it with something else -- wonder. Several of the stories are narrated by children, like British actor Colin Firth's "The Department of Nothing," about a boy enraptured by his grandmother's stories, and Zadie Smith's "I'm the Only One," told by a 14-year-old boy impatiently awaiting puberty. In "Peter Shelley," by Closer playwright Patrick Marber, a teen boy revels in the joys of first sex and the Buzzcocks' new single. Some of the stories are simply narrated by unusual characters with something new to say -- the widow cooking last meals on death row ("Last Request" by Giles Smith), the British prime minister rationalizing his curious escapades with a 15-year-old girl ("PMQ" by Robert Harris), the thuggish security guard wrestling with his feelings about a provocative crucifixion portrait (Hornby's delightful "NippleJesus").

It would be a stretch to say all these stories are so unselfconscious and searching -- Helen Fielding's "Luckybitch" and Irvine Welsh's "Catholic Guilt (You Know You Love It)" certainly aren't (Fielding and Welsh seem to be holding their narrators up for either ridicule or scorn; perhaps it's a coincidence, but their stories are also less memorable). But the other authors do seem to be reminding us that oh dear lord, we have not seen it all. We have not even come close. And that is great. That is wonderful. "I haven't been on a rooftop but was once in a plane and wondered why no one had told me," Steven the dog says. "That clouds were more ravishing from above." That is what authors -- especially hot, buzzed-about authors of the moment -- are supposed to do. Remind us that no matter how many times we've seen the sky, there is a different way to look at it.

This is not a McSweeney's Books book.