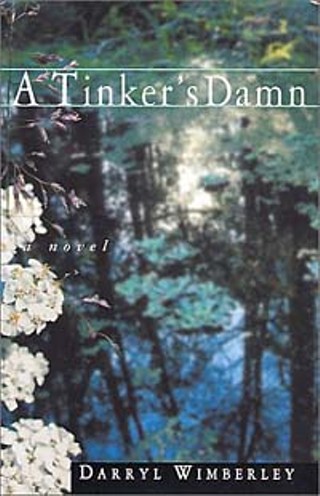 To properly reminisce about coming of age below the Mason-Dixon line, it's a given that your story will be framed by sultry summer nights and sweaty summer days. In Darryl Wimberley's fine literary novel A Tinker's Damn, he evokes the Floridian South with casual detail that evokes a comfortable, lived-in quality. It's a Florida that existed in the Thirties and Forties when the timber industry -- lumber barons and small loggers alike -- were harvesting the swampland cypress that was the generous bounty of a state half-covered in water. The work is backbreaking and dangerous and the men are aged in the salty swamps they tromp day and night.

A Tinker's Damn is a complex and finely textured parable. At the center of it is family -- more specifically Carter Buchanan, son, husband, and son-in-law. In the course of his lifetime he endures the conflicts of his roles and their attendant responsibilities and emotions: love for his parents. Ambition for his career. Responsibility for his spouse. And, like Harper Lee's To Kill a Mockingbird (the inevitable touchstone for this book), racial segregation is the bitter reality playing itself out in the Jim Crow South. Like his father, Tink Buchanan, Carter tries to be the truly color-blind man in a racially divisive climate where the faces hiding under Klansmen's hoods belong to neighbors and co-workers.

In the rural Thirties Florida inhabited by these woodcutters and sawyers, loyalty connotes a physical commitment that doesn't exist in the emotional remove of 21st-century urban life. The loyalty we see here, especially familial, assumes the willingness to spill blood if necessary. Its opposite number, betrayal, carries no less burden. This is the unsolvable dilemma facing Carter when he elects to insert himself into the bitter, decades-old land war between his father and his future father-in-law. Carter becomes the fulcrum upon which each tries to lever the other's world into the sea. Then, when the boundaries of class and race inevitably come between Carter and his oldest friend -- the black sawyer grown up and running his father's mill -- he has nowhere to turn except to his wife and himself. The consequences of his faithfulness and faithlessness are equally awful.

A Tinker's Damn is a radical departure from Dead Man's Bay and A Rock and a Hard Place, Wimberley's rollicking mysteries featuring Barrett Raines, the Florida cop whose abiding human frailties seem to delay, though never derail, his execution of justice. This novel unashamedly wrestles with the classic themes of fiction; the notion that there can be redemption for a great confusion of sins and sacraments is paramount. The rich characters and inventive story stay with us for a long time. Darryl Wimberley has crafted a soulful and engaging excursion into a time and a place. Darryl Wimberley will be at BookPeople on Tuesday, March 6, at 7pm.

An American Outrage: A Novel of Quillifarkeag, Maine