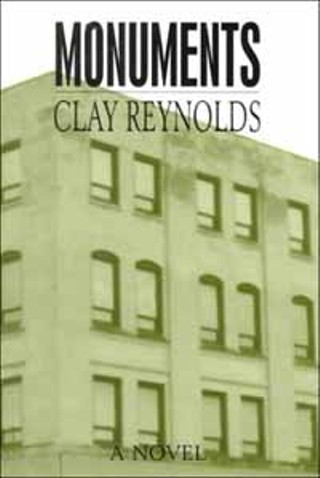 In all three novels of his Sandhill Chronicles -- set in imaginary Agatite, Texas -- Clay Reynolds pokes around in the underbelly of life in a small town. Throughout his first book, The Vigil, a subtle but chilling sense of evil permeates the banal activities of everyday life in Agatite, but it is an evil that cannot be blamed on any one person. A crime has merely "taken place," one that no one seems guilty of having committed. In the second novel, Agatite, evil enters the town in the person of Roy Breedlove, one of Agatite's own citizens, a petty thief whose life of crime eventually leads to the deaths of 23 people.

In his third Sandhill Chronicle, Monuments, violence emanates directly from the townspeople, although mostly as a result of their passivity, not evil intent. Mired in escalating corruption, Agatite is eventually saved through the efforts of 14-year-old Hugh Rudd, guided by old-timer and town outcast Jonas Wilson. Hugh comes of age in the midst of his hometown's fight to save its old Hendershot Grocery Warehouse building from destruction.

Like other boys on the cusp of Texas manhood, Hugh must learn to distrust women (including the sexy but bitchy schoolmate Linda; his fragile, mentally ill mother Edith; and his mother's lesbian friend Loretta), must fight against but gradually accept the wisdom of his father, must learn how to smoke, drink, and question authority, and then must prove himself by committing selfless acts and being wounded in battle.

The obstacles faced by Agatite's other citizens tend to be less physical in nature. Caught up in a battle with "big business" (Burlington Northern Railroad) over a building they had all considered an eyesore for years, each citizen uses the cause of historical preservation to serve whatever personal gain can be wrested from the situation. Carl Fitzpatrick, the power-hungry local big shot, takes the opportunity to oust the current mayor and to stump for the position himself. His wife uses the daily vigils at the building site as an excuse to show off her new outfits. Phelps Crane, the town drunk, finds the situation ideal for spouting his tales of earlier victimization by the railroad company. Before long, the town begins to gather daily at the foot of the warehouse "monument," reveling in the carnival atmosphere of barbecues, soft drinks, and gossip as they ostensibly show their support for the historical value of an old building none of them really care about. Hugh is astounded at the stories he hears at the foot of the Hendershot building. In effect, he becomes a repository for the truth about the town -- the alcoholism, the sexual infidelities, the hypocrisies, and the cruelties of the people he has known all his life -- and it is this as much as anything else that makes him a "man" by the end of the book.

Although Monuments is currently the last in the series of Sandhill Chronicles, Reynolds has two unpublished manuscripts also set in Agatite. With any luck, they will find their way into print soon.

Charlotte M. Wright is the managing editor of the University of Iowa Press and the author of Plain and Ugly Janes: The Ugly Woman in Contemporary American Literature.