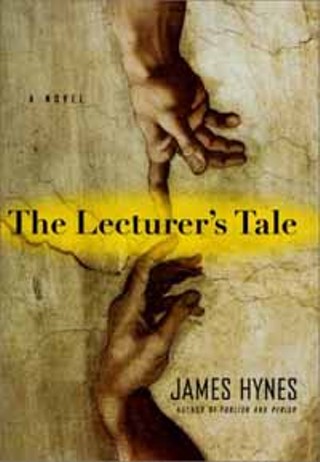 The Lecturer's Tale: A Novel

Nelson Humboldt lost a finger. The event was more absurd than tragic. He stumbled while walking across the campus quad at the University of the Midwest in Hamilton Groves (Minnesota) where he was a lecturer (though only minutes before he had been fired from that measly position). And when he fell, his right index finger was neatly severed in the spokes of a student's passing bicycle. And so the finger was lost.

But little else happens that is quite so mundane in The Lecturer's Tale, Austinite James Hynes' barbed lampoon of academic life. The unfortunate digit, later reunited with its mates thanks to modern medicine, acquires powers beyond Humboldt's wildest dreams. With a single touch and a casual, spoken suggestion he is able to impose his will on any person. The possibilities are daunting but alluring. Where before his future was nothing but a gray vision of himself slumping into failure -- What would become of his wife and young family when he joined the wretched unemployed? -- he now sees glimmers of light and opportunity.

Humboldt's world -- a major research university -- is filled with idiosyncratic behavior which Hynes views through a kaleidoscopic lens that warps it and renders it downright bizarre. Humboldt's colleagues are sketched broadly and mercilessly as a load of poseurs and sycophants who worship at the altar of tenure at the expense of scholarship and education. The whole wretched lot is overloaded with enough postmodern righteousness to make your teeth hurt. From one aspiring professor's paper on "The Lesbian Phallus of Dorian Gray" to the faculty candidate who delivers an impassioned dissertation on Viva Vietnam! -- an Elvis Presley movie that simply doesn't exist -- Humboldt's colleagues represent a hilarious amalgam of hyper-theoretical claptrap. In the midst of them, frumpy Humboldt longs for a return to the relatively staid study of English literature that first seduced him into academia.

Hynes rides this particular horse with a loose rein, and the unfettered story runs wild and free. Strange metaphysics are afoot, and the action is driven by literary slapstick -- outrageous drinking binges and odd sexual affiliations being more normal than not. Intramural political machinations are the order of the day; backstabbing runs rampant. It's unapologetically over-the-top and genuinely funny.

More than just a ribald tale of modern misbehavior among the learned class, The Lecturer's Tale sings a song of fervent love for the English language. Humboldt wants nothing more than to be left alone to molder into old age studying and teaching the hoary literary giants that he loves. And Hynes' writing is a celebration of words -- he puns and plays and concocts joyful bons mots with abandon. Which is not to say he doesn't relish the opportunity to launch merciless attacks on pretentious drivel. He does more than bait his hook to reel in pompous academicians: He fairly dynamites the pond and watches them float, stunned, to the surface. The Lecturer's Tale is a bawdy and bravura farce. James Hynes is relentless, and he brooks no humpuffery from the opposition.

An American Outrage: A Novel of Quillifarkeag, Maine