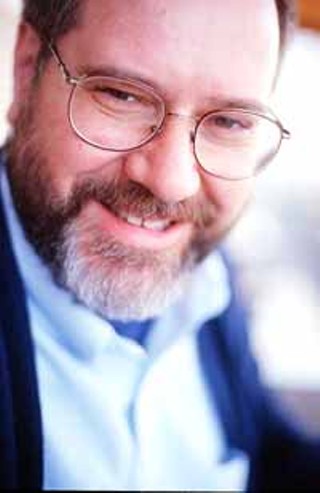 "I write about a subject in order to explain it to myself," Hynes has written. "A novel is my way of thinking out loud." (Photo By Bret Brookshire)

Next week, James Hynes will drive from Austin to St. Louis so that he can begin the book tour for his new novel The Lecturer's Tale, which is a satire. He is from the Midwest ("the small town of Big Rapids," Mich.), so the prospect of spending the month of February driving around the Midwest to read out loud from a book does not seem all that bad to him. Nonetheless, what he is concentrating on now, several weeks before his book tour, is a hot day that is indelible in his memory: August 3, 1997, the day The New York Times printed a review of his second book, Publish and Perish: Three Tales of Tenure and Terror, which is also a satire.

Publish and Perish is a funny book about people who aren't very funny. It is hard to like most of the characters. This is the basic plot of "Queen of the Jungle," the first novella in Publish and Perish: Paul, a big jerk, attempts to catapult his wife Elizabeth's early attainment of tenure into tenure for himself. It's no surprise that academic satires have a tendency to turn sour. Institutions of learning have lofty ideals and they should, but they also have a long way to fall. The discrepancy between what a university should be and often is is a well of inspiration that satirists have been dipping from for quite some time. Or at least satirists of a certain kind. The condensed action of "Queen of the Jungle" may make it sound like vile stuff, but Hynes, who has spent nearly his entire life in and around academia, shovels so much abrasive wit, detail, and knowing humor on top of the plot that the novella becomes a joy to read. Paul was supposed to be the successful one, but he is finishing a post-doctorate fellowship at substandard State University of Iowa, while Elizabeth, the better theorist, is tenure-track at a university in Chicago, so she's only home on the weekends. "Something was wrong with Paul and Elizabeth's cat, Charlotte," the story begins. "She was peeing outside of the litter box, and driving her owners to distraction." Charlotte knows a secret that Elizabeth does not: While Elizabeth is in Chicago, Paul is sleeping with a communications grad student named Kymberly who wants to have a talk show and put an extra "Y" in her name to distinguish herself ("it separated her from all those other Kimberlys out there, and would look terrific in the opening credits of her show"). Long ago, Elizabeth and Paul decided that they shouldn't feel required to say "I love you" to one another ("as an intervention against hegemonic practice," of course), but adultery is adultery, and eventually Paul has to pay.

Hynes had professors digesting the text with the kind of diligent glee usually favored by pre-teens trading Pokémon cards. But Publish and Perish also attracted readers who have nothing to do with the university because it is engaging and vivaciously unpredictable (even though Hynes borrows from that Victorian master of fright, M.R. James). Hynes has a vigorous respect for horror, for telling a good story. There are so many people looking over their shoulder in this book that they could easily fill a Calvin Klein ad.

Mixing academic satire and horror, at least in the form of three novellas, seemed like a gamble. It took eight months for Hynes' agent to sell Publish and Perish "and virtually all the major houses in New York turned it down," Hynes says. He tells a familiar story, of hearing editors say, "I love it, but ..." In his case, everyone seemed to say, "We love it, we think it's very funny, but who wants to read novellas? Novellas don't sell." George Witte, an editor at a new publisher, Picador, had something to prove and was willing to take a risk on books other editors wouldn't touch. He paid Hynes an advance that covered both Publish and Perish and The Lecturer's Tale, and Publish and Perish, Hynes says, "earned the whole advance back and then some, so it was the first time in my life I ever actually made money on a book over and above the advance." (Hynes got an agent one month after enrolling at the Iowa Writers' Workshop. His first novel, The Wild Colonial Boy, which is a political thriller, received good reviews but Publish and Perish seems to have had a more sizeable readership.)

Then Hynes read what he calls his "dream review" of Publish and Perish in The New York Times. "Hynes is fearlessly playful, a riveting storyteller and a graceful observer of human folly," novelist Cathleen Schine wrote. "She called me gleefully playful or something like that," Hynes now recalls, several years later, "and I really took that to heart when I was writing [The Lecturer's Tale]." Gleeful, fearless: In Hynes' satirical universe, there's not much of a difference. In fact, the satirist known for having a little fun at the expense of literary theorists created a theory of his own while writing The Lecturer's Tale. "I was ... basically operating under the principle of 'throw it on the wall and see if it sticks,'" Hynes says. "If it made me laugh, it stayed in."

Things that James Hynes threw on the wall that stuck: