Book Review: Off the Bookshelf 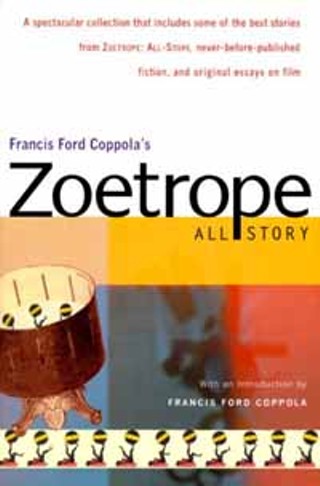 If, as Francis Ford Coppola's three-year-old quarterly asserts in its masthead, Zoetrope: All Story were truly "all story," and not Zoetrope: Mostly Stories and a Few Self-Aggrandizing Essays on Crafting/Peddling Our Screenplays in These Terrible Times, this debut collection would likely be even closer to perfect. Granted, the essays come from the likes of David Mamet and Salman Rushdie, but still ... leave those slots for the non-millionaires. As is, the magazine that commissioned Melissa Bank's "The Girls' Guide to Hunting and Fishing" when it was just a story idea, has put forth a warm, subtle anthology that expertly proves Coppola's introductory point: Short fiction contains "all the basic elements that a film needs in one package: character, plot, and setting." Solid efforts from stalwarts Bank, Amy Bloom, George Makana Clark, Tim Gautreaux, and Philip Gourevitch surround pieces such as newcomer Adam Haslett's "Notes to My Biographer," a maddeningly sly account of a delusional 73-year-old "inventor" finally confronting his neglected son. Bookended by fascinatingly plotted works from Sara Powers and Robert Olen Butler (1993's Pulitzer-winning A Good Scent From a Strange Mountain), Zoetrope's stories read like the marquee of your dream cineplex: 15 great ones, all in one place.