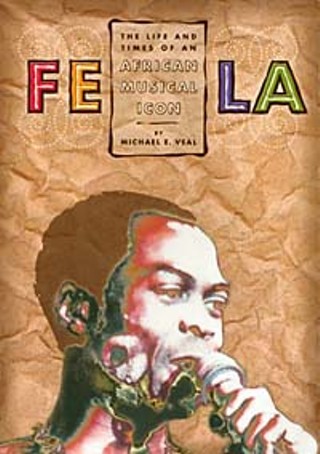 Fela: The Life and Times of an African Musical Icon

"Artists are here to disturb the peace." This quote by distinguished African-American author and playwright James Baldwin opens Michael Veal's thorough and nuanced biography of Nigerian Fela Anikulapo Kuti, easily the most influential political and sonic star from Africa. Veal chronicles Fela's amazing life story as the son of a feminist activist mother and teacher-preacher father, to his days in music school in London in the early Sixties, and his awaking to Pan-Africanism during the Los Angeles race riots of the late Sixties. In the Seventies and Eighties came his ultimate creation and refinement: afrobeat, a highly charged musical style that mixes complex polyrhythms with James Brown funk beats, jazz solos, and substantial political commentary on the corruption and kleptocracy that has sadly defined post-colonial Nigeria.

The author, a Yale professor, tells Fela's story using interviews, magazine articles, documentaries, liner notes, and other biographies, weaving a description that's simultaneously cogent, readable, and entertaining. He strikes a successful balance between an easy-to-read academic tone and extra-informative musical prose. Veal also doesn't shy away from the paradoxes that help define Fela, such as his problematic approach to women, a difficult personality, and refusal to acknowledge the threat of AIDS (which killed him in 1997). One gets a sense of what Fela was like after reading Veal's description of the famous nightclub owned by The Chief Priest, as Fela was often known: "After purchasing a ticket and being frisked for weapons at the doorway, audience members enter the interior of the Shrine, a semi-enclosed countercultural carnival of funky, political music, pot smoking, mysticism, and provocative dancing."

Veal spent time in the Shrine and played saxophone with Fela and his Egypt 80 band. It must have rubbed off, because he writes like Fela plays music, powerfully and with meaning: "At the heart of this chaotic, contentious, and contradictory lifestyle was an earnest and authentic search for an African cultural revitalization, a refusal to submit to mindless authority mindlessly, and one of the most irrepressible and profusely creative African spirits of the late twentieth century."

You don't have to be a fan to read and enjoy Fela, but odds are you will be when you finish.

Fela: The Life and Times of an African Musical Icon, Michael E. Veal