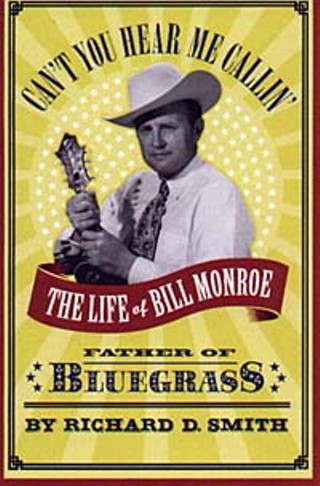 Can't You Hear Me Callin': The Life of Bill Monroe, Father of Bluegrass

When it comes to musical icons from the past century, Richard D. Smith's Can't You Hear Me Callin' puts Bill Monroe in the front rank. Right up there with Frank Sinatra, whom Monroe once met at an arts luncheon hosted by President and Mrs. Reagan, prompting the following exchange:

Monroe: Now, what did you say your name was?

Monroe: And what is it that you do?

Monroe: I believe I've heard of you.

Sinatra: Well, I hope so.

Monroe was a collateral descendent of another president, James Monroe, and by Smith's reckoning, one of the few men to single-handedly spawn an entire genre of music. Bluegrass is basically the songs Monroe heard growing up in Kentucky run through his preternatural musical abilities, which rivaled any jazz or classical virtuoso.

Smith's book works a little better as a historical document of Monroe's life and times than the psychological profile it tries to be at times, but the author is the first to admit that Monroe was nothing if not an enigma. Monroe grew up ill-treated and ignored by his older siblings, lost his mother in adolescence, and turned to music (and later women) for companionship and solace. He just happened to have the kind of skills, and just enough encouragement from people like his Uncle Pen, that would one day bring him worldwide fame, if not exactly fortune. Among other contributions, Smith argues, Monroe was one of the first confessional singer-songwriters, setting true-life tales of love and woe to music before Hank Williams.

Even if he wasn't the easiest guy to work for, Monroe's longtime band the Blue Grass Boys was a peerless finishing school for musicians from Jimmy Martin, Lester Flatt, and Earl Scruggs to Peter Rowan, David Grisman, and Del McCoury. There was hardly a name in either country or bluegrass who didn't have contact with Monroe -- or rock & roll either, as Elvis, Johnny Cash, Chuck Berry, and Carl Perkins were all fans. Can't You Hear Me Callin' is at its best when it shows the effects of this wild new hip-shaking music on Monroe's more genteel milieu, how it nonetheless stoked his creative engines and eventually led to the creation of the bluegrass festival circuit. Smith also discreetly details the number of romantic liaisons in which Monroe engaged and doesn't skimp on describing their consequences or how such entanglements could result in sublime Monroe compositions like "Blue Moon of Kentucky."

A hundred years from now, Monroe's name is likely to be mentioned in the same breath as Stephen Foster, John Phillip Sousa, Charles Ives, and Scott Joplin as one of the great American composers, and Smith's exhaustively researched, meticulously footnoted work certainly makes a compelling case. Even if this tortured, taciturn genius thought he picked those sublime melodies out of the air, Can't You Hear Me Callin' shows why they could have issued from Bill Monroe alone.

Can't You Hear Me Callin': The Life of Bill Monroe, Father of Bluegrass, Richard D. Smith