Licks of Love: Short Stories and a Sequel, "Rabbit Remembered" 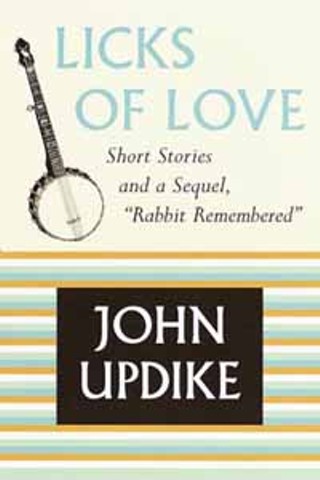 Licks of Love: Short Stories and a Sequel, 'Rabbit Remembered'

I do not know why I was allowed to read Rabbit, Run when I was 15 years old. Originally published in 1960, it was America's first glimpse into the life of Harry "Rabbit" Angstrom, a former basketball hero in the town of Brewer, Pennsylvania. Not only was I allowed to read the book, filled with sex, angst, and more sex, but I loved it, and became strangely fascinated with raunchy Rabbit and his spacey wife Janice. A friend once told me, incredulously, that while he devoured all of John Updike's "Rabbit" books (Rabbit, Run was followed by Rabbit Redux in 1971, Rabbit Is Rich in 1981, and finally Rabbit at Rest in 1990), he could not imagine he would want to spend more than two minutes in a room with Rabbit himself. I second that emotion. And this is one of Updike's gifts: He can take the ordinary lives of flawed people and make them resonate, reverberate, and shine.

And now, with Licks of Love, Updike combines short stories with a novella, "Rabbit Remembered," that checks in on Rabbit's survivors in the millennium. (Rabbit himself died in Rabbit at Rest.) Rabbit's widow Janice has married his nemesis, Ronnie Harrison, and a child that Rabbit had fathered with a lover shows up at the door, middle-aged and hoping for love. Rabbit and Janice's son, Nelson, has kicked his Eighties coke habit and become a very sensitive Nineties social worker. Nelson's own son, Roy, lives with his mother in Akron and bonds with his father by sending lewd jokes over e-mail. Updike nails the Nineties in the same way he did previous decades, as the short stories in Licks of Love remind us. Most of the stories were published, beginning in the Fifties, in The New Yorker, and most are brilliant and eloquent portraits of men who are looking for sex, wish they had not just had sex, wish they had just had sex, or are fondly remembering sex. For Updike's characters, love is a tangled mess of yearnings that never quite go away, but simply change focus and direction, no matter what the decade. (In case you're wondering, "Licks of Love" certainly does refer to what you think it does.)

"Rabbit Remembered" leaves readers with Rabbit's family celebrating New Year's Eve, 1999. Janice, predictably, has gotten into the tipple, and her grandson plans to spend the night checking on Y2K results around the world. Nelson, his newly discovered sister, his estranged wife, and his old pal Billy head to a showing of American Beauty in Nelson's off-white Toyota Corolla. They get into a raunchy discussion on the way home, and the millennium dawns in true Updike style, with his characters hoping for love, hoping for peace, hoping for salvation, and yes, hoping for sex.