The Dark Valley: A Panorama of the Thirties 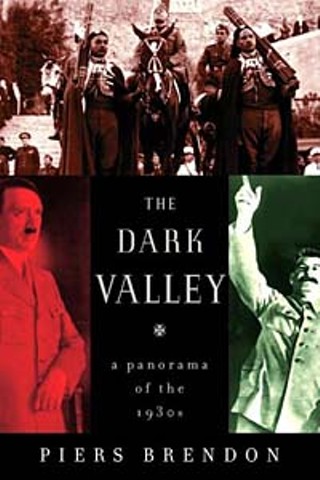 The Dark Valley: A Panorama of the 1930s

In 1916, at the Battle of Verdun, which was actually a yearlong concatenation of battles between the French and the Germans over the fortified French city of Verdun, 300,000 people died and 450,000 were wounded. As in other battlefields of World War I, Verdun was essentially a metropolis of trenches, out of which, periodically, waves of soldiers would rise, fling themselves across acres of churned-up mud, and be machine-gunned in great heaps by the soldiers in the trenches of the other side. Wilfred Owen wasn't far wrong when he said that battles like this "slew half the seed of Europe, one by one."

Although The Dark Valley is subtitled A Panorama of the 1930s, British historian Piers Brendon is quite right to begin it in the midst of World War I, with this battle, for it is in scenes of similar mad carnage, exquisitely planned by popinjays with the best genealogies, which brought to an end the old order in Europe. The old order had been cobbled together after 1815 when, on another battlefield in the plain common to northern France and Belgium, Napoleon's soldiers were routed by an alliance between the Prussians and the English. True, there had been wars and revolutions in the interval, but the 19th century in Europe maintained a distinguishable culture, an order of things. What was the old order? A compromise between positivism and aristocracy; a balancing between the atavistic instincts of Junkerdom -- even the French, ostensibly a republic, boasted a nobility -- and the efficiencies of Manchester liberals; an odd mix of piety and Darwinism, castigated by starving poets, such as Baudelaire, and analyzed in terms of its essential, conceptual incoherence by mad philosophers such as Nietzsche. Why did the order die? A good question -- at the time, the modernists were quite positive it was a morality play, as the spiritual body could no longer bear its own deep dishonesty, its rotten smugness, its capped but festering hatreds.

Brendon has created a synopsis of the world picture by concentrating on those nations which, in the Second World War, were the major hostile forces: Japan, Germany, Italy, the USSR, the USA, France, and Great Britain. This picture excludes the third world, from India to South America, but entails, even so, a tremendous amount of work with a very broad brush. Brendon isn't concerned with the cultural history of this period, or with economics, but with political history. Borrowing Carlyle's maxim, he sees history as "the sum of innumerable biographies." Brendon's previous work, which includes biographies of Eisenhower and Churchill, has given him a lot of background in the period, and he is very deft at choosing anecdotes and quoting memorialists and diaries to bring into relief the whole sad, soft parade of dictators, generals, and diplomats.

Who ruled in the Thirties? Stalin, Hitler, and Mussolini ruled: three criminals. A fourth criminal, Chiang Kai-Shek (literally a connected guy -- his patron, Tu Yueh-Sheng, was the biggest drug supplier, pirate, and warlord in China), spent the decade massacring peasants in a vain attempt to decapitate Mao's Communist party. Chiang gave his off time to fighting the Japanese, who steadily conquered most of the urban areas. In Britain, the decade was dominated by three non-entities: Stanley Baldwin, Ramsey McDonald, and Neville Chamberlain. Baldwin was a conservative who broke the General Strike of 1926, which was Britain's soggy and unsatisfactory approximation of the Ten Days That Shook the World. Nothing, in the end, was shaken. Nothing shook, either, under Ramsey MacDonald, one of those breed of Labor leaders who, straight upon assuming office, betray labor. As for Chamberlain, the guy with the umbrella at Munich, Brendon's portrayal is scathing. There's been a mini-boom in Chamberlain among conservative historians the past decade or so, with the refrain, "Appeasement was working!" The idea is that Britain could have saved its empire by letting the Nazis attack the Soviets. The phrase that is often used is "letting the wolves eat each other." The illogic of the phrase points to its origin in a Looney Tunes cartoon, and not real life: Eating, a non-commutative function, entails an eater and a thing eaten. Whichever eater had won would be that much bigger and more dangerous. One suspects that those historians who push this line harbor, under their seeming protestations of realpolitik, a reserve of anti-Semitism. They also have highly unrealistic views of the empire. They are the British counterparts to those conservative historians who, every year or so, throw out a book claiming we could have won in Vietnam. It's a sterile, revanchist mindset, and Brendon is quite good at defending the old, established viewpoint. His account of Chamberlain, and his foreign minister, Halifax, operating a sort of diplomatic installment plan of concessions to Hitler, is really stomach-turning. At a certain point, one has to say the obvious thing: The ruling class in both England and France was an out-and-out set of shits. No revisionist history will ever rescue this set of dodos.

Brendon has obviously worked hardest on his Japanese sections. There are some nice set-pieces here -- the Tokyo earthquake of 1923, the abortive army rebellion of 1936 (which so charmed Mishima for its combination of butch politics and sadomasochistic young officers), and the "Rape of Nanking," among others. I think Brendon is far too sparing of Hirohito, however, and his parallel between the two island nations, Britain and Japan, is neither subtle nor convincing. When Brendon solemnly informs us, for instance, that Churchill naturally embodied "the British samurai spirit," it is hard not to laugh -- more like the British sumo spirit, given the quantity of food which Churchill, according to Brendon, habitually wolfed down. Still, the best thing in the book is probably Brendon's grasp of those elements that contributed to the success of Japanese militarism.

Japan was in an uncomfortable position. Its lack of natural resources made it peculiarly dependent on foreign trade, which in turn underpinned its modernity. The stock crash was followed by a policy of trade tariffs which were textbook awful, setting off a further spiral of business failures. In the old days, Britain had responded to its lack of resources by stealing vast regions of the earth and incorporating them into an empire. France, on a lesser scale, did the same thing. But when Japan tried to do this after World War I, it was condemned by the other powers. Partly, as the Japanese suspected, this was hypocrisy, but partly there had truly been a moral shift away from imperialism. The ideology that had insulated the empire-building of the French and the British from moral and political questioning was no longer credible. The shift was deep-seated enough that, in the aftermath of World War II, the French and the British found no great popular enthusiasm for keeping Indochina or India by force, and were forced to fight, when they did fight, against Third World nationalists in a sort of moral crouch.

I sit in one of the dives

As the clever hopes expire

Of a low, dishonest decade.

Brendon has a feeling for the lowness and dishonesty. How about the clever hopes?

One of them, certainly, was peace at any price. This was a stupid hope, a hopeless hope, a misreading of Hitler's character and system. Hitler could not afford peace after putting his country on a war footing so decidedly (by 1937, half of the German budget was going to arms manufacture alone). If Jüdenhass was his ruling passion, war was the only trick he knew. This is the hardest thing to understand about the Thirties democracies, because it seems so obvious now. Unfortunately, it was a lesson that was learned all too well in the postwar years, as Cold Warriors harped on the parallel between Munich and détente. Stalin was many things, but he wasn't Hitler, and none of the Soviet leadership after Stalin adhered to the doctrine of Totalmobilmachung -- total mobilization -- toward which Hitler strove.

But Auden's "clever hopes" obviously has a broader reference than merely Neville Chamberlain's failed foreign policy. The romantic lefty in me picks up on those hopes: The hope that Franco would lose the war; the anti-Fascist popular front; the hope that the working class would smash the owning class, or the more moderate hope that wealth would be more justly distributed -- these were the preoccupations of Thirties intellectuals, and it is fashionable to stick pins in them. Sure, those fellow travelers who saw, in Stalin, a kindly Socialist genius were wacky. But the New Dealers who realized that the state could and should play a role in the economic lives of Americans were right.

Leon Blum's Popular Front government, in France, which granted the 40-hour week and pay raises, were right. Right, that is, even from a capitalist viewpoint. As Keynes had the genius to see, the system lacked demand, and it wasn't going to instill consumer passion by cutting back the income power of most of its population. Because Brendon is British, I think, he doesn't feel this as much -- in Britain, it wasn't until Churchill was deposed, in 1945, by Labor, that the amenities of the welfare state were put into place.

The final scene in Brendon's book, in fact, exemplifies the haplessness of interwar British culture. Before Poland was invaded, Chamberlain tried to do the sensible thing, and come to terms with Stalin. But he entrusted this crucial task to a non-entity with the Wodehousian name of Admiral Reginald Aylmer Ranfurly Plunkett-Ernle-Erle-Drax. The Soviets apparently found Drax's Order of Bath particularly humorous, as they were under the impression that it referred to a washtub rather than the resort town. While Drax took a slow steamer to Leningrad, and then pottered about Moscow, doing a spot of touring, Germany was sending out its own feelers. Finally, Ribbentrop arrived, and on August 25, Drax left the USSR. Two days before, Stalin had signed the Molotov-Ribbentrop pact, which officially allied the USSR and Germany. On September 1, Hitler, moving an army considerably faster than Admiral Drax had moved his diplomatic entourage, invaded Poland, thus bringing an inglorious end to the Blandings castle world of the Draxes.

The Dark Valley: A Panorama of the Thirties, Piers Brendon