It would be hard to imagine a nastier character than Ray Bob. This career recidivist's moral compass is permanently off-whack throughout Robbers, Austinite Christopher Cook's fine debut novel. He shows no remorse for the casually horrific violence that he regularly doles out. In fact, he seems not to understand that such an emotion is possible. He is motivated by the pretzel logic of the criminal class -- it's him against the world and the world better be packing heat if they cross his path.

Vicious, senseless crime and desperate acts by desperate losers -- these behaviors form the crux of this grim Texan-noir tale of two misfits -- Ray Bob, an unrepentant sociopath, and Eddie, an erstwhile whiteboy blues guitarist -- tooling around the state in a ragtop Cadillac. But these are not the troubled adventures of misguided youths who skirt the edges of the law. Instead, from the opening scene where they gun down an Austin convenience store clerk and slay a police officer without batting an eye, this is a litera veritas chronicle of life on the lam and a trail of crimes committed without rhyme, reason, or repentance.

Eddie is no angel, but he's a far cry from the callous reprobate that Ray Bob is. He's lazily amoral but he's proud to be Ray Bob's running buddy even if he wishes they weren't shooting up quite so many innocent civilians. The slippery slope of petty crime soon lands him in the maelstrom of felony offenses and there's no way to turn back or make things right. His infatuation with a trashy, young, single mother of two provokes extreme jealousy in Ray Bob, which adds a weird and irrational dynamic of lowlife drifter vengeance to the mix.

The other half of this crime-and-punishment equation is Texas Ranger Rule Hooks -- a methodical, old-style crimebuster who sets out from Austin in measured pursuit of the at-the-time unidentified badass duo leaving a bloody trail in the general direction of the Gulf Coast. Rule is reminiscent of Dave Robicheaux (James Lee Burke's bayou-Zen lawman) and though he is thinly sketched at first, Cook gradually adds color and shading until he appears as a nicely nuanced character. While Ray Bob plays cat and mouse, Ranger Hooks executes a moseying 10-day search of East Texas and the Gulf Coast. A showdown is inevitable and, sure enough, it takes place in the deep rural isolation of Ray Bob's home ground in the East Texas bottoms.

Cook's terse narrative style is well suited to the dark and rumbling story being told. It doesn't provide an easy entry to the book but eventually a rhythm asserts itself and Robbers chugs along at the on-the-run backroads pace of its characters. Cook is clearly intent on breaking some of the crime fiction clichés that haunt the genre and he succeeds to some extent when he follows his storyline down some genuinely unexpected avenues. And there is a nice bit of mistaken identity confusion thrown in for good measure.

The publisher's promo brazenly likens first-time novelist Cook to Elmore Leonard and James Lee Burke "at their toughest and funniest." The Burke reference is on-target though very premature. But drawing any comparison to Leonard's screwball capers is way off base. Robbers might be loaded with irony, but the satire and dark humor that drives Leonard's best work is thin on the ground here.

Christopher Cook's raw voice is an exciting and welcome addition to the modern noir fiction scene. Robbers is gritty and believable. It's like riding shotgun with society's nightmare -- a killer sociopath with nothing to lose.

Christopher Cook will be at Barnes & Noble Arboretum on Tuesday, Nov. 21, at 7:30pm. 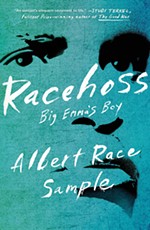