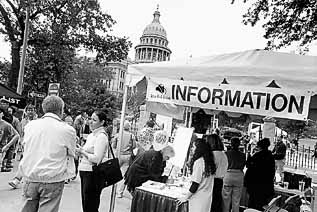 Our Town: Literature From Rural Roots

In a time when Texas' rural past is mostly "honored" by cow-chip tossing contests during Pioneer Day or especially twangy television commercials for pickup trucks, the Texas Book Festival managed to present a thoughtful and entertaining meditation on the subject. Moderator Shelby Hearon, author of the forthcoming Ella in Bloom and a longtime Austin resident who now resides above the Mason-Dixon line, began the discussion with brief remarks framing the panel as the more graduate school-sounding discussion of "place in fiction," although the original topic's emphasis on rural roots survived.

Hearon began by struggling to master the microphone in the august legislative committee room. A festival volunteer went to get a sound technician and came back with the message that the panel should "try to talk more like legislators" since the microphones were set for the more stentorian tones of politicians. The struggle for mastery over technology became an apt metaphor for the panel, though "metaphor" may not be the most appropriate word. Near the end of the panel, when Hearon posed an interrogatory for the panelists by asking them about place as metaphor, she apologized for using "an English teacher word." She pronounced it "metaphur" in homage to the day's theme, as did Jane Roberts Wood.

Hearon made it plain that her own novels begin with a sense of place, which she further characterized as "home for [her] characters." She then invited each of the panelists to make remarks, not to exceed 12 minutes in length, about their own views of place in their work.

Poet Dave Oliphant began his comments by reading an excerpt from his poem "Nixon" about the Gonzales County town, which the poet discovered for himself owing to a speeding ticket he got there. The poem is part of Oliphant's new collection of poems set in Texas, Memories of Texas Towns & Cities, and in "Nixon," he concludes that even "a nowhere place is inexhaustible." Mitch Cullin discussed moving his place from West Texas in his earlier novels to a remote farmhouse in Central Texas in Tideland, his new novel. In both places, however, his characters "fill up the emptiness with themselves."

Novelist Edward Swift, now living in New York City, grew up in the Big Thicket of East Texas, listening to his elders tell their tales in their unique accents and rhythms. Swift read from one of his books a brief description of a sawmill town, really a cluster of a dozen or so unpainted, wooden, company-owned houses grouped near the mill at a dirt crossroads in the woods, a place which smelled of rotting wood and lay smothering beneath the heat for eight months of each year. "I don't think you choose place; I think place chooses you," Swift said. Jane Roberts Wood, author of the very fine epistolary novel The Train to Estelline, unsurprisingly averred that place was a character in her novels. In her work set in West Texas, the wind is almost a character itself. Her use of East Texas and West Texas settings in The Train to Estelline leads the reader to experience the same transformation her protagonist has in arriving on the high, bald plains from the more Southern and genteel environs of Bonham, Texas. Wood said, "I depend on landscape because I can never depend on my characters."

In the vineyard of fiction, I cultivate a few scraggly mustang vines in a rocky corner that depends on some contemplation of our rural roots. This panel was amply qualified to speculate upon the question and did so to the rapt attention of the 100 or so auditors. As The Devine News, my hometown newspaper, always said at the end of the social notes column, "A good time was had by all."