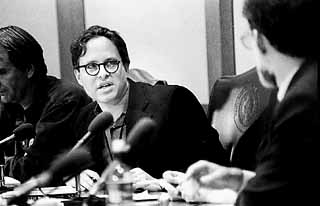 Left, Right, & in the Middle: Pundits on Politics

Leave it to the comedian to get the last laugh. At Saturday's "Left, Right, & in the Middle: Pundits on Politics" session, panelist Bill Crawford (author of Democrats Do the Dumbest Things and Republicans Do the Dumbest Things) pointed out cheerfully that there is a perfectly good reason the presidential election is so close: There isn't much difference between the major-party candidates. Crawford's co-panelists -- The New Yorker's Nicholas Lemann and Gov. Bush's Marvin Olasky -- were quick to disagree, insisting that Al Gore and George W. Bush represent quite distinct positions and therefore the split electorate indicates a real split in the national judgment. But Crawford (who also recently edited Texas Death Row, a factual compendium of the inmates executed since the restoration of the death penalty in 1982) noted that when Bush publicly stumbled over the details of the James Byrd Jr. murder convictions, his opponent couldn't take advantage of the gaffe -- because Gore also enthusiastically supports capital punishment.

It shouldn't have been so easy to stump the pundits, but there it was. Olasky devoted his time to promoting his own sectarian version of "compassionate" welfare reform (i.e., give the tax money to jackleg preachers) and his candidate Bush as the great conciliator ("Gore believes in class warfare"). He insisted that there are major differences between Bush and Gore, e.g., both support "charitable choice" for faith-based welfare programs, "but Bush really means what he says, and Gore doesn't." Olasky called for a national compromise of "compassionate de-centralization," under which the states would be allowed to spend federal welfare money as they see fit. When it was pointed out from the audience that the states -- Bush's Texas prominent among them -- prefer to let children go sick and hungry rather than spend even already-allocated dollars, Olasky changed the subject to Christian prison rehabilitation programs.

Lemann, author of The Big Test: The Secret History of the American Meritocracy and extended magazine profiles of both major candidates, confessed to finding the unsettled election results "scary and disturbing." He said he is "not sleeping well at night" while the vote remains unresolved, but comforts himself by recalling that the election is a sign of "the success of our political system," because most societies would be delighted with two huge, stable parties which peacefully divide the political spoils. When an audience member pointed out that a majority of the electorate no longer bothers to vote, Lemann shrugged, "That's been going on for a long time." He was surprised, he said, that the voting breakdown indicated that people continued to vote for their perceived economic interests as defined by their actual circumstances, rather than in response to the candidates' campaign "messages." "The press doesn't seem to understand that," admitted Lemann.

Moderator Rick Dunham, a writer for Business Week, had already acknowledged that Jim Hightower, originally scheduled to join the panel, was unable to do so, and therefore, said Dunham, "We sort of lost the real Left." It was probably just as well; Hightower's colleagues would only have blamed him for encouraging Ralph Nader to run, thus threatening the tranquil stability of our successful political system. On the other hand, Hightower could certainly have pointed out that on a political spectrum of "Left, Right, & in the Middle," he would prefer to speak for The Bottom: all those many millions of folks that neither Al Gore nor George W. Bush meet at their $1,000-dollar-a-plate campaign fundraisers, and whom the pundits, right and left, have entirely forgotten.

It was left to Bill Crawford to point out that 40% of the voters hate Al Gore, 40% hate George Bush, so that the election is being decided by the 20% of the voters "who don't know what planet they're on." "The real winner," concluded Crawford, "will be the man who has the good sense and decency to concede first." Don't hold your breath.