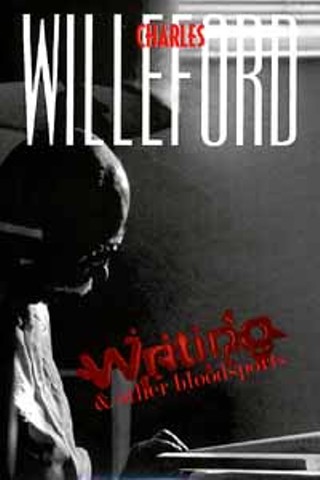 Charles Willeford published 18 novels, many of which were highly literary works that passed under the fence as pulp fiction, others under the guise of contemporary crime fiction. Another way of summarizing his unusual output (which also included poetry, screenplays, and plays) is that Willeford never met a genre that he couldn't subvert. He's best known for his series of four South Florida cop novels, which star a downbeat homicide cop named Hoke Moseley. Beginning with Miami Blues in 1984 and ending with New Hope for the Dead in 1988, the year of the author's death, the books not only brought Willeford mainstream success, but revitalized a tired genre. They also established South Florida as the sunny capital of weird crime and Willeford as the godfather of what has become a sizable subgenre of mystery fiction.

South Florida served as an ideal canvas for a writer of Willeford's rich experience, playful storytelling techniques, and grasp of the things that link the mondo and the mundane. But crime writing was only one facet of a very faceted man. Calling Willeford a mystery writer is like saying Leonardo da Vinci was a guy with a beard.

Willeford's love of classic literature is a persistent feature of his work. Cockfighter, published as a paperback original in 1962, was a hard-boiled retelling of the Odyssey. Willeford also wrote the screenplay for the 1974 movie and played a key role in the film. Most of the novels Willeford wrote between 1953 and the early Seventies ended up looking right at home on the drugstore paperback racks, with their lurid covers and outrageous titles like Lust Is a Woman (1958) and Understudy for Love (1961). Even in such works, however, Willeford injected serious, often reflexive themes. This might sound more credible when one remembers that Willeford's original titles for the previously mentioned novels, for example, were, respectively, Made in Miami and The Understudy: A Novel About Men and Women, but those titles were replaced by his publishers without his consent. And anyone who happened to pick up Pick-up (1955) or High Priest of California (1953) would be treated to writing that transcended its genre with a unique and capricious brilliance.

On the other hand, even in Willeford's nominally more serious work, such as the critically acclaimed Burnt Orange Heresy (1971), subversion is the norm. A characteristic Willeford protagonist will confound one's expectations by being, for example, a sociopathic womanizing car salesman who reads classic literature (High Priest of California and The Woman Chaser), and will likely accomplish superhuman feats motivated more often by simple selfishness, revenge, or carnal desire than by noble intent. A reader's inherent expectations that a hero must be a sympathetic and a moral human being are likely to be challenged -- maybe shattered. A Willefordian hero's antagonists are often unlikable because of their lack of sophistication or intelligence, but they are just as often mere cogs in the Kafkaesque universe, dutifully playing a role.

By contrast, a Willefordian hero, bad as he might be, is always compelling and fascinating and somehow a likable guy. He makes his antagonists dull by comparison. One gets the sense that this was certainly true of the author as well.

Writing & Other Bloodsports gives us a sense of Willeford's inner workings and concerns as he expounded on the craft of writing, offering his opinions of other authors, from favored contemporaries to icons like Kafka and Henry Miller, and anecdotes taken from his vast personal experience. The collection contains so many gems it seems unfair to single out specific samples. But it would take a hard heart and small brain to fail to be moved by "Hat," which purports to be about the author's large and interesting hat collection but ends up being about a woman who broke his heart and humiliated him at tennis. Of his critical pieces, "Jim Tully: Holistic Barbarian" says as much about the things Willeford valued most in writing as it does about that sadly underappreciated author, whom Willeford greatly admired. His pieces on Dashiell Hammett, Chester Himes, and John D. MacDonald are among the best if not the best writing on those legendary men, and "Don't Kill Your Wife -- Please!" is one of the funniest inside stories on being an editor (at Alfred Hitchcock's Mystery Magazine) that I've ever read.

The opening essay, "Writing as an Art," is worth the price of the book alone. Conveying its message in the sly and deceptively simple manner in which the author excelled, it begins: "The novel is a case history of the writer. It is the story of his life written as well as he can write it. It never ends; it goes on day after day, year after year. He is his own hero, his own heroine, his villain, his minor characters ..." This is the piece to which I return time after time, especially whenever I feel the need to be reminded of just why I am sitting here in front of my keyboard. Afterward, I will read "Hats" again for possibly the 100th time. Every reading is time well spent. Writing & Other Bloodsports is an essential book.