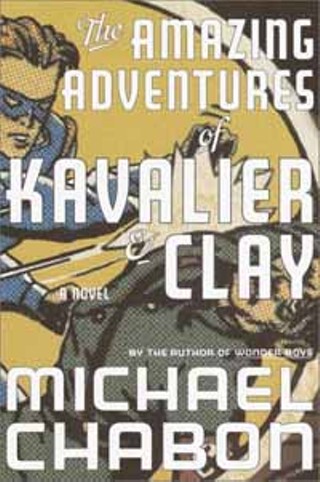 The Amazing Adventures of Kavalier & Clay

Michael Chabon has won many trophy adjectives for his relatively short literary career. "Intelligent" he has been called many times, and

"lyrical" and "beguiling." With his expansive new novel, the author of Wonder Boys and Werewolves in Their Youths makes a wholehearted effort at achieving that most dangerous adjective of all: epic. On one level, of course, The Amazing Adventures of Kavalier and Clay is simply a well-spun tale of two cousins who create a comic book empire out of talent and fortune over several rough years. But the ambitious Chabon uses his deeply affecting characters to cast his own light on the general state of the world from the late 1930s to the mid-Fifties. The novel becomes, at the same time, a Holocaust tale, a reflection on sex and surrealist art, and an encyclopedia of escapists and tricks. Perhaps the best adjective for the wonder boy here is "vertiginous." Joe Kavalier, the showier half of the title duo, opens the narrative by arriving in Brooklyn in 1939 after his family sends him away from Prague in order to save him from a certain Nazi death. Kavalier has left his home circuitously (scrambling through Japan and the American West before reaching New York) and with understandably mixed feelings -- it is the place where he grew up with his younger brother Thomas and learned Houdini-like tricks in hopes of becoming a world-class magician. In New York, he moves in with an aunt and his cousin Sammy Klayman (soon to be Clay), who dreams up the idea of using Kavalier's impressive artistic talents to create their wealth inspired by the leaps and bounds of Superman comics.What they devise is a surefire hero named The Escapist. And here's where Chabon lives up to that promised intelligence. The team of Kavalier and Clay use their superhero to fight not only fiend-on-the-street crime, but to lash out at the unspeakable breach committed by the Nazis, to unlock the mysteries of their maturing personae, and to reach levels of fame and influence they could not have expected. The Escapist, it seems, allows them to break out from the traps of their own unheroic lives. Armed with an engaging idea, Chabon executes his narrative with a precise and wholly undeniable grace. He manipulates the reader, too, soberly and with full awareness of the impact of his ultimately sorrowful plot. Despite some seriously questionable choices the author has made (changing the setting of his story to Antarctica for a significant little chunk of the novel, for instance), the effect of the work remains weighty and pure. The identifiable grief that his boys feel as they enter and stray through adulthood, realizing the full nature of escape and illusion, is reason enough to make this novel a worthwhile read. But add all of Michael Chabon's parallel tales and dreams, and not an adjective on Earth can reach the novel's moments of triumph.

Michael Chabon will be at BookPeople on Thursday, October 26, at 7pm.

The Amazing Adventures of Kavalier and Clay, Michael Chabon