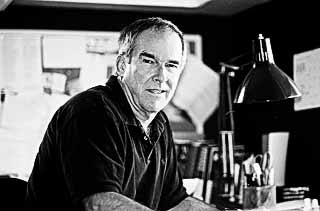 As corny as it sounds, I have to say that my life changed 14 years ago, the day my bike tire blew out -- the second time in one week -- right in front of John Trimble's house. He was working in his well-manicured yard and, as I pulled up to a stop sign a few feet away from one of his flower beds, the cap gun pop of my tire startled both of us. Though I'd passed his house regularly on my rides and often seen him out there gardening -- tanned, athletic-looking, mid-forty-ish -- I'd never heard of the author of the venerable Writing With Style book or his legendary UT writing classes. So frankly, when he rushed over and graciously offered to give me and my hobbled bike a lift home, my only thought was, "Who is this guy and why is he being so nice?"

The walk home being long and the hour late, I decided what-the-heck. We made the kind of awkward small talk that you'd expect from two sweaty strangers who unexpectedly find themselves strapped into the bucket seats of a Toyota coupe, talking through the spokes of a bike wheel. He told me about his job in the English Department and his writing classes, and I told him that I wrote some as a sideline to my then day-job as a lawyer. As he unloaded my bike onto my driveway, I thanked him profusely and he mentioned that I might enjoy taking one of his classes. Right, I thought. Years removed from any sort of academic setting, what would be more intimidating than signing myself up for an intense little writing class?

Still, the idea lingered, particularly as I subsequently asked around and gleaned some of the lore surrounding J.T.'s classes. The courses, Advanced Expository Writing and Article Writing, it turned out, were well-known in local writing circles, both for their rigor and enormous (30 plus hours a week) time commitment. Those who'd come through a Trimble class wore the three-hour credit like a Purple Heart. And many, like John Schwartz, now of The Washington Post, had gone on to successful writing careers. Taking a Trimble class was fast turning into something I knew I ought to do, despite my reluctance.

In true writers' workshop fashion, each week one of us would "showcase" our work, reading aloud while the class followed along, editing on copies. Then came the class discussion. It took just one spin -- just one -- in that hot seat to learn to catch yourself, midbreath, about to interpose some vigorous -- make that "defensive" -- explanation of what you'd meant to say. Revelation No. 1: If the reader didn't get it without your over-the-shoulder input, you'd blown it.

Many of us brought to the class a romanticized notion of the writer as iconoclastic thinker finding artistic expression and release by channeling complicated thoughts -- inscrutability intact -- onto paper. We quickly learned, however, that though writing may seem an inherently solitary activity, it is, in fact, relentlessly interactive. As our kahuna, J.T.'s job was to drive home the "relentlessness" part -- the most seemingly insignificant lapse into solipcism or fuzziness drew a raised eyebrow and his purple pen. 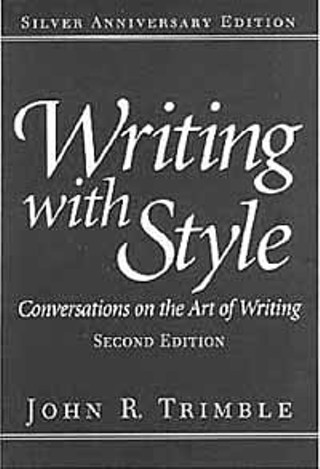 J.T. is a black-belt editor and writing coach. His classes, their accompanying manuals -- at this point, one of them has attained the heft of a three-volume, 700-page collection of good writing clips -- and his Writing With Style book represent a career-spanning monomania: the reverse-engineering of good writing. J.T. coached us to find our voice, take risks ("Have you ever summoned the courage to write a one-word sentence?" Or paragraph?), and reveal ourselves honestly. Then stand back, revise, tighten, and brighten with as much ruthless objectivity as possible. Like literate Geiger counters, our sensors shrieking at clichés, internal contradictions, missed opportunities ("M.O.'s"), merely adequate verbs ("M.A.'s"), bumps, comma splices, or dangling modifiers, to name just a few. Only when we could refrain from high-fiving our own bons mots and stare them down with the remove we applied to the work of our classmates was there any hope of ascending to the writerly high ground -- and the realization that the real satisfaction in writing was in the rewriting.

A warm, egalitarian Mr. Chips, proud of and well-deserving of his charter membership in UT's elite Academy of Distinguished Teachers, J.T. never tires of his self-appointed mission. Remarkably, over 50 semesters of teaching these classes, whose democratic format he designed and is forever tweaking, and his first-day excitement at pushing off from the dock with a fresh group of hopeful rookie writers has not diminished one bit. Nor his palpable delight -- eyes twinkling, dark, bushy eyebrows bobbing -- at coming across a good read, or even just a well-turned phrase. Fortunately, everyone in the class, whatever their mastery level, was capable of producing at least one of these during the course. Having something you'd written affectionately made public by J.T., the connoisseur, was one of the ways he made each of us feel that, with but a little excavation and a lot of writerly will-out, we could actually have the right stuff.

Of course, the worst mistake one could make was to expect a kudo -- oh, that coveted purple check-plus next to one of your words, sentences, or grafs! -- to be followed by so much as a momentary relaxation of our mentor's tough, unflinching standards. Just because he liked something you'd written didn't mean it couldn't be made a whole lot better. The improvement process, as far as J.T. is concerned, is never complete, every piece forever a "work-in-progress." The knock-yourself-out back-patting that followed a call, at home, asking whether you would be interested in polishing up one of your pieces for inclusion in his "good writing" class manual was pretermitted by the seeming interminability of the polishing part. If it were so good, why did it need so much work? Draft after draft would come back marked up with J.T.'s ambiguity-seeking purple pen, new ones turning up even on the third or fourth round until, finally, one was returned with purple only on some obscure formatting minutiae which (did I mention?) J.T. also takes very seriously.

I matriculated from J.T.'s class with a brand new writer's and reader's sensibility, a more alert and articulate internal critic -- and a lifelong friend and editor, just a phone call or, until a few years ago when he moved, a bike ride away. Now writing full-time, if a piece I'm working on needs (and my fragile ego can bear) the scrutiny, I'll often ask and he'll still graciously -- and unsparingly -- edit my work. Other more chicken-hearted or deadline-restricted times, I'll just send him a copy of the published piece. Of course, the fact of publication has never deterred him from ringing me up to rail about this semi-colon or that em dash, and whether national publications even staffed copy-editing desks anymore. I'd have to admit that in all the years I've been doing this, I've never once encountered an editor as tough as J.T. Not even close.

Imagine the anxiety generated by writing this piece about him.

Trimble's Writing With Style: Conversations on the Art of Writing (Prentice Hall, 198 pp., $23.80), which came out in a Silver Anniversary Edition in April, is about the closest you can get to a Trimble class without registering at UT. Written in J.T.'s signature buoyant conversational style, embodying each of the principles he teaches, the second edition of the book -- now required reading at places like Stanford -- gave J.T. the chance to do the thing he loves most: revise and polish a book about good writing and rewriting. He truly walks the talk: Twenty-five years and 32 printings later, J.T. was only too happy to take yet another swipe at this "work-in-progress." Apologizing in an author's note that the book he'd hoped could be read over a couple of cups of coffee would now probably require a few more, he concedes, "The book became a friend I was loath to bid good-bye to."

Next out of the chute: a work he's been polishing, at least since the week my bike tire popped twice, Editing Your Own Prose. Like I say, the guy walks the talk.

John Trimble, Writing With Style: Conversations on the Art of Writing