Has Daniel Clowes Really Grown Up? 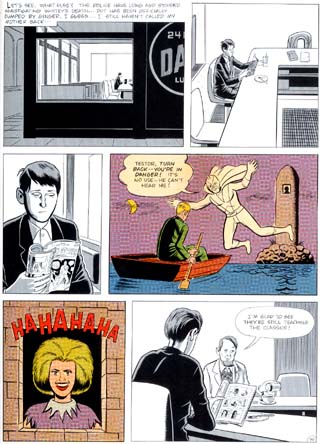 It's tempting to call cartoonist Daniel Clowes a chameleon, except for one problem. Though the Berkeley-based writer/artist's comic book Eightball may feature cheap Archie-like gag pages, autobiographical meanderings, tales of twisted adventure, or dips into a number of other genres, it doesn't really blend in with anything else on the racks. No less a source than Newsweek has called Clowes "the country's premier underground cartoonist," a term that might make ex-hippies think his work consists of explicit sex and drug humor. "They probably use the word 'underground,'" he explains, "because that's the term I tend to use, when hard-pressed to pigeon-hole myself, because I'd rather be linked to the underground cartoonists (Crumb, Spiegelman, Deitch) than whatever 'edgy,' 'alternative' creator is popular today."

Clowes was born in Chicago on April 14, 1961 -- Jayne Mansfield's 29th birthday -- and studied art at the Pratt Institute in Brooklyn, even though he considers his college training to have been of little value, offering little technical information. That makes him young enough for "alternative" and alternative to be an important distinction. While the Village Voice notes that Clowes "spells out the realities of teen angst as powerfully and authentically as Salinger did in Catcher in the Rye for an earlier generation," he's definitely not one of those here-for-a-moment-then-less-than-zero scribes claiming to be the voice of a generation. Still, his early work tended to swallow and vomit out an entire generation's thoughts -- 1985's Lloyd Llewellen comic series was an early Mad-style pastiche of beatniks, detectives, UFOs, and most other types of plots that ever made their way onto pulp, all warped a bit and served up for laughs. Lloyd Llewellen tended to be more weird-funny than "haha" funny, something which Clowes may have realized as he returned with the personal anthology Eightball. Still largely drawn in a style suggesting Richie Rich pencils inked by one of the EC artists who used to do Weird Science or Tales From the Crypt, Eightball covers more serious -- though no less odd -- ground. The first element of Eightball to gain acclaim was "Like a Velvet Glove Cast in Iron," a serialized (now collected) tale of a young, alienated man stuck in a world of headless dogs, S&M-crazed, small-town police, and homely, potato-headed women. In short, a perfect Twilight Zone episode for a world that has completely lost its footing. The title, in Clowes' pop culture-sniping fashion, is a quote from Russ Meyer's cult classic film Faster Pussycat! Kill! Kill!.

Since "Velvet Glove" and its shorter companion pieces in those early issues, Clowes has managed to befuddle any detractors he may have with the constant evolution and increasing maturity of his work. He takes on the comics industry itself with a "fanboy" character named Young Dan Pussey (who, sadly, bears incredible similarity to a certain "Death of Superman" inker that this writer went to high school with), and examines the social lives of America's youth in the oft-praised "Ghost World," which is presently in the works at MGM as a film helmed by Crumb director Terry Zwigoff.

Currently, Clowes is coming off a three-year stint working on his longest story to date, a three-issue, 116-page affair called David Boring, the story of a desolate, dysfunctional young man (the kind who always ends up being John Cusack in the movies) dealing with romance and obsession as a nuclear disaster looms on the horizon. It's quite a leap away from the shorter pieces usually seen in the book, and it's the type of move that tends to earn Clowes' peers like Joe Matt and Chester Brown steady streams of hisses and boos from the peanut gallery. Clowes says he doesn't -- or literally can't -- worry about such reactions. "I try not to think of the readers," he explains. "My only goal is to keep myself interested in what I'm doing and one way of doing that is to constantly vary my approach, which seems to create a perpetual turnover in the readership. After working on David Boring for three years, I am now doing a full-color issue with nothing but one- and two-page strips."

Though it's very expensive for small-run, "underground" comics, Clowes has always tried to include as much color in his comics as the budget will allow. That's not a surprise, as he grew up reading colorful kids' comics, and his work not only pokes fun at them, but also shows a nostalgic fondness for the superheroes of yesterday. Still, Clowes doesn't see the kids of today starting with the X-men and working their way to Eightball. "I would absolutely see them as a gateway if they were in fact read by children," he snorts. "Unfortunately, the vast bulk of the superhero readership is made up of adults who have little interest in moving on to more 'challenging' work -- and who can blame them?"

Besides Lloyd Llewellen and Eightball, Clowes' work has appeared in a myriad of forms and forums, including Details, The New Yorker, Blab!, Cracked, World Art, the Village Voice, Esquire's annual fiction issue, album covers for bands such as the Supersuckers and Urge Overkill, the infamous OK Soda cans, in animated form in the Ramones' video "I Don't Wanna Grow Up," and in theatres and on video racks via the movie poster for Todd Solondz's film Happiness. Clowes' graphic novel collections include Like a Velvet Glove Cast in Iron, Lout Rampage!, #$@&!: The Official Lloyd Llewellyn Collection, The Manly World of Lloyd Llewellyn, Pussey!, Orgy Bound, Ghost World, and Caricature: Nine Stories. After all that, one might expect Clowes to be eager to try taking his talents to another, less demanding venue like television, but no, he says, he's still content to sit at his drawing board for the time being. "Working on the Ghost World movie has been a great experience," he explains, "and I hope to do it again someday, but I still prefer the absolute control you get with comics."