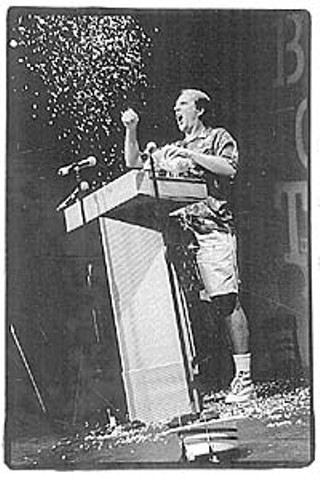 It's official: Republicans are the dumbest. By a fraction of a decibel, the Grand Old Party won the "dumbest election" staged by author Bill Crawford and Monks' Night Out comedian Andy Cobb last Tuesday, August 8, at the Bad Dog Comedy Theater. (Conveniently, the Play-Doh-faced Cobb played all the characters himself, from a scowling, jowled Richard Nixon to a sniffling, coke-addled Marion Barry.)

It may not be really fair to draw those sort of distinctions, though -- a point for which Crawford's new books, Republicans Do the Dumbest Things and Democrats Do the Dumbest Things, offer ample evidence. After eviscerating rock stars and movie stars (with the help of Chronicle staff writer Margaret Moser) in previous books, Crawford (who also writes for the Chronicle, Texas Monthly, and Oklahoma Today) said Tuesday night that, without a doubt, Republicans and Democrats were both the dumbest.

As evidence, Crawford offered the following: When a campaigning George W. Bush wanted to prove his Texas roots to the media in 1990, he went out dove hunting with a group of photographers. But instead of shooting a dove, he landed a killdeer -- an endangered species -- and a $300 fine. After picking the dead bird up off the ground, Bush told the media by way of explanation, "They look a lot alike." "Not a good quality for a commander-in-chief to have," Crawford quipped Tuesday. "'Oops, that was a Concorde? I thought it was a Mig!'"

Crawford's books, while light as a soufflé, are fun, quick, and -- though we hate to admit it -- informative reading. Like the hyperkinetic Crawford himself, Republicans and Democrats are funny and quick to reach the punchline. Taken together, they're a whirlwind compilation of often hilarious facts and forgotten tidbits that make up, if not a history, an irreverent portrait of two parties that have produced at least as many astonishing blunderers as true political heroes. No one is spared here, least of all the people we've come, through the frosty lens of memory, to adulate in restrospect. (Think LBJ, John F. Kennedy, and, of course, that quintessential gaffer Ronald Reagan.)

A final funny story, this time from the annals of Richard M. Nixon's presidency: "On Dec. 21, 1968, Elvis presented President Nixon with a gold-plated handgun." In return, Crawford said, "Nixon gave Elvis an honorary badge from the Drug Enforcement Agency. Elvis, of course, was on a personal campaign to rid America of drugs -- by eating as many of them as he could."