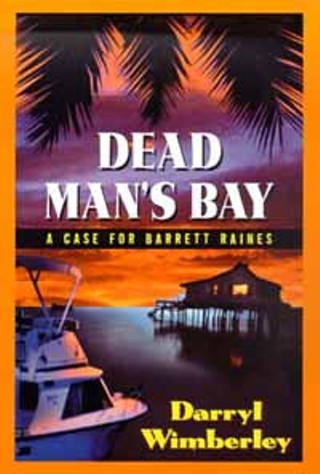 A Case for Barrett Raines

It's a pleasant synchronicity that the month of July brings brilliant second novels from two of America's most promising new mystery writers -- Austinite Darryl Wimberley and Tampa Tribune crime reporter Ace Atkins -- who share a razor-sharp wit as well as a publisher's imprint.

When he debuted in A Rock and a Hard Place, Darryl Wimberley's Barrett Raines was the most fascinating cop hero to ride onto the mystery scene since Hoke Moseley. With Dead Man's Bay: A Case for Barrett Raines, Wimberley has more than sidestepped the sophomore slump. He has made a quantum leap into the first rank of mystery writers with uncanny speed; he has become that good that quickly.

Dead Man's Bay opens with "Bear" Raines trying to flush his life away -- drinking beer for breakfast in the No-Tell Bar and Grille in Tallahassee's Frenchtown. Unfortunately, his $48.50 beer tab has precluded his scheduled participation in a meeting with his captain, his partner, and Florida's governor.

Bear has split with wife Laura Anne over familial issues, he (and his partner) have been busted down to desk jockeys, and his life is spiraling downward. Amazingly, when a dead-end assignment sends him off to the tiny Florida fishing village of Dead Man's Bay, Bear is coaxed back into the world of the living by an unlikely combination of heat, grunt work, saltwater, and a nagging mystery.

Don't call Barrett Raines the best new hard-boiled cop nor the best black cop -- just call him the most interesting cop on the block. Period.

While Barrett Raines is a black cop crime-fighting in a mostly white world, Leavin' Trunk Blues places white blues scholar-cum-detective Nick Travers smack dab in the middle of Chicago's black and blues community. Travers, who debuted in Atkins' Crossroad Blues, is every bit as likably flawed the second time around. This time the New Orleans-based musicologist buys his train ticket to Chicago to interview legendary blues songstress Ruby Walker in the jail cell she has called home for 40 years. He quickly finds himself embroiled in an investigation to clear her name for the murder of Billy Lyons. When all other leads are exhausted (or exterminated by the bad-ass trio of Annie, Fannie, and Stagger Lee), the focus narrows to a September 22, 1959, recording session -- the last night of Billy Lyons' life.

Atkins is at his very best when he's cooking up delicious dialogue and back story for characters like harp player Dirty Jimmy and Nick's love interest Kate Archer. He climbs into their skin and brings them alive.

Leavin' Trunk Blues is a fun read and a loving homage to Chicago blues and the rural blues players who migrated to the Windy City to create that scene. Its one awkward and sour note is Atkins' attempt to resurrect the fictitious song characters Stagger Lee and Billy Lyons (he of the Stetson hat). It will be wonderful to see blues themes continue through the Nick Travers series, but Atkins will be performing a disservice to himself and his readers if he feels compelled to force blues legend and lore into every story. Otherwise, from start to finish, Leavin' Trunk Blues fairly sings with rollicking, rowdy adventure and glows with the spirit of the blues it celebrates. Nick Travers is the man; Ace Atkins brought him to you.

Ace Atkins will be at Adventures in Crime and Space on Friday, June 30, at 5pm. Darryl Wimberley will be at BookPeople on Thursday, July 20, at 7pm.