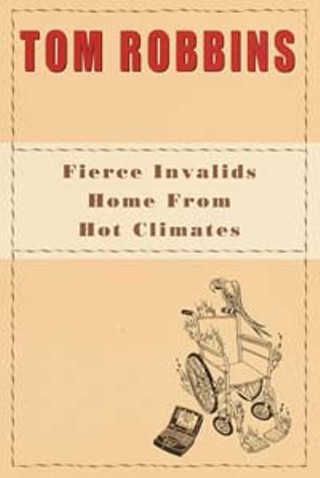 Switters, the CIA-agent hero of Tom Robbins' seventh novel, Fierce Invalids Home From Hot Climates, is described as being "like a puncture in a high-pressure hose, spurting in all directions, spuming with an irrepressible puissance." The same could be said for Robbins. But while Robbins' synesthetic, acid-head writing has resulted in some great literary trips in the past, Fierce Invalids Home From Hot Climates lacks the force of his previous works.

Switters, a spook with a secret love for Broadway show tunes and a yen for young girls -- in particular his 16-year-old stepsister Suzy -- has been sent by his grandmother Maestra to release her aging Brazilian parrot into the Amazonian wilds. While on this quest, Switters is introduced to End of Time, a guru who places a geis on him, the violation of which will mean his death. Confined to a wheelchair as a result of the taboo, Switters spends the majority of the book's 400 pages pondering the question of the Third Prophecy of Fatima (which, according to Robbins, has nothing whatsoever to do with a papal assassination attempt) at an unauthorized convent in the Syrian desert.

Robbins has always written with his heart on his typewriter. His novels are philosophical allegory as much as they are rollicking sexy fiction. Fierce Invalids features the typical Robbins hallmarks: a jack-of-all-trades dangerous yet pacifist nice-guy hero, a sensually knowledgeable yet essentially innocent heroine, an enigmatic yet oddly comforting spiritual figure. But the story, never as possessing as Even Cowgirls Get the Blues or Still Life With Woodpecker to begin with, loses impetus somewhere in the Syrian desert and never regains it. Although the book has a nice buildup and pleasant-enough course, Fierce Invalids doesn't inspire much in the way of consciousness-blasting transport. It's not a bad trip or a good trip; it's just a ... trip.