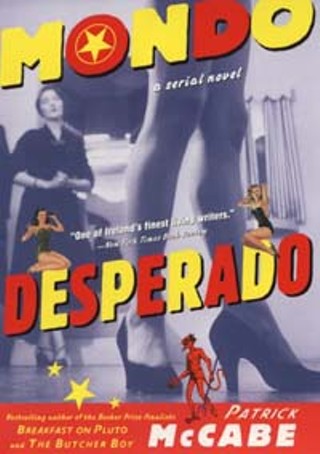 Patrick McCabe mixes pop-savvy intellectualism with an edgy, amazingly elastic sense of humor. Mondo Desperado, his first collection of stories (although categorized as a serial novel) is even further over the top than his previous works, most notably Breakfast on Pluto and The Butcher Boy. In it, McCabe introduces readers to the fictional Irish town of Barntrosna, a sleepy backwater where Satan is the local curate, young ruffians blow up student priests, and all manner of seedy, unspeakable things happen on hot nights at the local Go-Go Lounge.

McCabe surrounds his 10 stories with a rather thin attempt at meta-fiction; namely, that Mondo Desperado's "real" author is one Phildy Hackball, a Barntrosna homeboy who spent his youth at the local cinema sneaking into B-movies and "mondoes," shockumentary films intended to show viewers the weirdest, most unnerving sights imaginable. He bolsters this conceit with concocted blurbs, an amusing foreword written by an adoring London editor, and even an author bio at the back of the book. While the concept doesn't seem to have much of a point plotwise, it does provide a justification for McCabe to toss aside all pretense of realism, adopting a bosom-heaving! multi-exclamation-pointed! style and choosing for his subject matter the stuff of Fifties and Sixties low-rent movies.

McCabe's strange genius shocks, then delights. He's taken any number of American, British, and Irish influences, from Russ Meyer to Bram Stoker, and given them the Waring blender treatment. Several of the stories depend on tropes taken from movies that have been twisted and turned inside out. "The Forbidden Love of Noreen Tiernan" is the "women in prison" movie done over, with a tip of the hat to The Searchers and The Magnificent Seven. Dr. John Joe Parkes, hero of "The Valley of the Flying Jennets," discovers the genetically mutated, half-angel, half-barnyard animal experiments created by an ancestor. In "The Bursted Priest," Declan Coyningham, the holiest boy in Barntrosna, is blown up by his schoolmates in a manner unfit to be mentioned in the pages of a family newspaper.

McCabe's characters are only slightly more disturbing than they are desperate. They may transgress social mores with the exuberance of a Catholic teenager getting drunk for the first time, but they retain afterward a hangover feeling of lost innocence. It's a peculiar, not always welcome, sort of realism on McCabe's part that allows Dympna Wrigley, in "The Luck of Dympna Wrigley," to poison her mother, escape Barntrosna for Dublin, fall into prostitution, find salvation in the arms of a rich john who marries her then takes her triumphantly back to Barntrosna, only to be haunted by guilt and the specter of her time in Dublin.

McCabe doesn't hold back on weird, but he isn't wholly brutal to his characters. He endows most of them with a degree of emotional depth that makes them sympathetic as well as laughable. Funny, relentless, and brilliant, Mondo Desperado is a look at a world almost as uniquely strange as it is desperate.