Safekeeping: Some True Stories From a Life 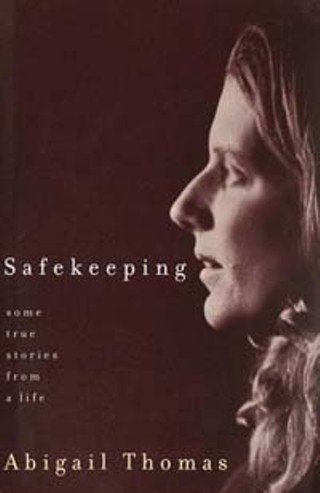 Safekeeping: Some True Stories From a Life

While baking an apple cake for her young grandchildren, Abigail Thomas squelches the impulse to tell them that she, as their grandmother, is not a mere synonym for "cake." If she could, she would tell them that in her youth in the 1960s she wore miniskirts without panties, had a shotgun wedding at the age of 19, strings of meaningless affairs between her ill-fated marriages, listened to Hendrix and the Beatles while raising her children in unfurnished apartments (she used an overturned drawer for a kitchen table) while never learning to clean house. Of course, she cannot tell such things to her doting grandchildren. In her memoir Safekeeping: Some True Stories From a Life, however, Thomas is remarkably candid about her carefree love life -- and often careless parenting -- in her attempt to trace her path from Sixties flower child to cake-baking grandmother.

Thomas, formerly a literary agent and now an English professor in New York, has received glowing critical acclaim for previous story collections based loosely on her past. In moving from fiction to memoir, this collection of wallet-sized vignettes (most run a paragraph to two pages) reads like a collaboration between Richard Brautigan and Joni Mitchell. In Brautigan fashion, each story enlarges a cellular moment through the judicious selection of detail and delivery, suggesting conceptual possibilities (like good poetry) as opposed to concrete conclusions. Thomas' confessional honesty, meanwhile, is acutely reminiscent of Mitchell's thematic treatment of insecurities, self-doubt, and the compulsive need to feel desired. The last of these was virtually all-absorbing for Thomas:

The Vietnam War was on, and they all believed so earnestly that things must and could change, a single voice raised with other voices would fix the world. And making love was really making love, they thought, something hopeful was released into the air, every time, like a nutrient for the planet. She craved experience and she confused experience with sex. Not to knock it. But it isn't the be-all and end-all she'd once thought.

Although Thomas does confess to occasional regrets, it remains clear that she has weathered her relationships without bitterness toward her lovers (quite the opposite, actually), and without the enduring self-chastisement that ages people ahead of time. She views her past as more comic than tragic, each episode another brick of enlightenment along the road to her ultimate question: Have I finally grown up? Fortunately, Thomas never quite arrives at an answer, and to this end Safekeeping stands as a refreshing testimonial for the unrepentant -- and in Thomas' case unsinkable -- youthful free spirit.

Safekeeping: Some True Stories From a Life, Abigail Thomas