Was Davy Crockett Really the King of the Wild Frontier? 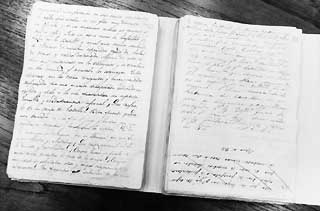 José Enrique de la Peña has been telling stories, and not everyone wants to hear them. A lieutenant colonel in the Mexican army who fought at the Alamo in 1836, both his voice and his controversial narratives survive in the form of a massive, 680-page diary that details his eyewitness account of the short and brutal war that led to the independence of Texas. But thanks to one very brief passage in the text, the encyclopedic diary itself has been at the center of a heated ideological war about how Texas should view its heroes and myths since its first English translation was published 25 years ago. Offering compelling challenges to the traditional story of how Texas came to be, de la Peña, it seems, is still fighting his tough revolution. The notorious passage, which claims that the mythic Davy Crockett was captured by Mexican soldiers and executed by order of General Antonio Lopez de Santa Anna instead of dying in the glory of patriotic battle, has severely angered those loyal to Crockett's reputation and has brought rise to countless historical questions. These questions and mostly unsearchable answers were the subject of a daylong conference on April 29 organized by UT's Center for American History and titled "Eyewitness to the Texas Revolution: Jose Enrique de la Peña and His Narrative." Bringing together historians and experts on the Texas campaign for independence, the panels mixed high drama and deep thought to grapple with the authenticity and accuracy of the manuscipt itself, as well as to discuss larger trends in the formulation of cultural histories. Most importantly, conference organizers promised to reveal the results of scientific tests on the diary that would prove once and for all whether the voice of the colonel was authentic.

The problem, of course, is that authenticity does not guarantee accuracy. Even if it could be proven that the de la Peña diary is not a forgery, there could be no way to resolve the question of how Davy Crockett died. The Mexican observer could have lied about what he saw, after all, or he could merely be retelling false or distorted secondhand tales. Still, there was a curious mood in the LBJ Library auditorium as the results of the tests were about to be revealed. One group of college-aged kids started placing bets on the fate of the diary: "I'll give you a dollar if this is really a fake."

There were those, too, in the audience who had spent years trying to discredit the manuscript for whom the moment seemed overwhelmingly fateful. Chief among them was Bill Groneman, the New York-based author of Defense of a Legend, which claims that the diary is a forgery that has irresponsibly tarnished the reputation of an impeccable hero. The Crockett that Groneman and his fellow defenders continue to cherish is not a man who was captured and beaten, but the standard and iconic Fess Parker figure, complete with the intriguing hat and surrounded by piles of Mexican soldiers at his feet. 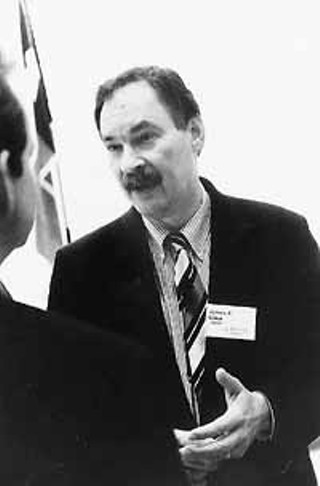 For those who fell somewhere in between the two sides of the fight over how Crockett died, there were a number of fascinating issues to consider. During his lunchtime address, novelist Stephen Harrigan (The Gates of the Alamo) noted that he would not be surprised if the document turned out to be fake. "There is something hauntingly not quite right about it," he said, commenting on the diary's shifting tone and points of view. "Something kept me from falling in love [with it]." Others simply marveled at the stubbornness and fanaticism of those caught up in the fight. "This was like a two-headed snake that struck twice with one lunge," said Dora Guerra, who curated the diary during its previous stay at the University of Texas at San Antonio.

So when David Gracy, a professor of archival enterprise in the graduate school of library and information science at UT, took to the podium to announce the results of his tests, a great many people straightened up and sat at the edge of their seats. There was utter silence as he vigorously and exhaustively recounted the extent of the tests on the ink and the paper, the comparisons of handwriting samples, and the logical arguments to support what he found. "Unavoidable is the conclusion that the journal is authentic," he declared in his almost inappropriate fashion, heatedly addressing many of his points directly to Groneman. And for an unspeakable moment, the hero Davy Crockett seemed deader than ever, marred not by blood but by ink.

The second most important question of the day, and the one that is even harder to answer, has to do with the fascination and genuine need that cultures have to create unreal myths based on historical events: Why does it matter how Davy Crockett died? The facts are that he fought at the Alamo, he did die, and he has been honored for it. To many, it seems nothing but a technicality if he was captured and killed instead of having gone down fighting. But James Crisp, a professor at North Carolina State University, argued at the conference that the instant legend of Crockett and his colleagues had a profound effect not only on the self-image of the state that they created, but on the actual immediate effects of the war.

"Santa Anna lost two battles on April 21, 1836," Crisp said, refering to the defeat of the Mexican army at San Jacinto. On the one hand, he claimed, they lost an actual and present conflict on the muddy fields in one afternoon. But there was also the subtext of the unfinished Alamo fight, made all the more present by the cries of "Remember the Alamo." It was the gravity of the myth that had already been formed that changed what could have been a small assault into a decisive victory that wrenched a gargantuan chunk of land from the Mexican government. If the ghost of Crockett had not been there, in other words, the war might have continued much longer.

But Crisp admits, too, that the issue at stake with the de la Peña diary is not just the simple question of how one man died, but the issue of how history is made and how voices are silenced. He's right. One undeniably crucial concern which was never explicitly addressed at the conference was the fact that the diary's Mexican origin casts complex shadows on how it has been received in an American audience. For those who have had trouble accepting the fact that Crockett was captured, for instance, one must wonder how much of their outrage is intensified by the fact that the capture came at the hands of a Mexican army. Is the actual history made all the more unacceptable due to idea that not only was the adventurous and physically superior Crockett executed, but that he was executed by a Mexican force?

When a figure like Crockett becomes the symbol of the entire state and its history, that question becomes a bit dangerous. The factors involved in such a discussion deal with the hopelessly complex relationship between two cultures and two histories. It is a delicate conversation to have, for sure, but the argument over whether one man's diary is real, and the argument over how one soldier was killed, becomes important only in this light. In her speech, Guerra joked that the fascination people have with the diary is akin to tales of Elvis Presley sightings. What people have invested in this debate is not some mere fandom or kitsch, but a genuine passion for how the story of Texas is written and how it affects real life. It may no longer matter how Crockett was killed, but it does matter how we now allow him to live.