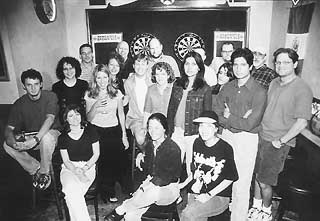 A little camaraderie goes a long way in a creative writing program: SWT students at the River Pub in San Marcos after workshop. (Photo By Ada Calhoun)

The 10-year-old creative writing program at Southwest Texas State University is a secret dying to get out. David Fenza, the executive director of Associated Writing Programs, evaluated the program in 1997. He considers it to be one of the top 20 American writing programs. "They've really put together a wonderful program. The region ... should be proud of it. They're contributing to literature on a national level," Fenza says.

He ascribes this success in large part to support from the SWT University system, the quality and dedication of faculty members Kathleen Peirce, Debra Monroe, Cyrus Cassells, Dagoberto Gilb, Steve Wilson, Tim O' Brien, Roger Jones, and in particular to the efforts of Tom Grimes, the director of the M.F.A. program. Grimes assumed the directorship in 1996.

"I inherited this program and it had a good solid base. And my job, what my vision for it was, was to expand it tenfold, as quickly as I could," Grimes says. A graduate of the Iowa Writers Workshop, Grimes wanted to create a program that would attract acclaimed writers as speakers and faculty and provide the highest quality support for students to realize their writing talents. "I never wanted a mediocre writing program," he says firmly.

Kathleen Peirce, whose most recent poetry collection, The Oval Hour, won the Poetry Society of America's William Carlos Williams Award and is a finalist for the Los Angeles Times Book Prize for Poetry, says that a student contemplating an M.F.A. at Southwest Texas State University can expect a three-year course of study, which is divided equally between studio work in their chosen specialty and literary theory. She adds that students finishing their thesis -- typically either a novel or a collection of poetry -- have their work read by a well-known writer selected from SWT's adjunct faculty of published novelists and poets. "I believe we're the only program that does this," she says.

Scott Blackwood, a 1997 graduate of the program, Chronicle contributor, and author of In the Shadow of the House, a forthcoming short story collection from SMU Press, says that the strength and generosity of its faculty distinguishes the SWT program from others. He recalls that at one point, when it appeared that his financial situation would force him to leave the program, that faculty members pushed to create a teaching assistantship for him to enable him to stay at SWT.

Teaching and instructor assistantships like the one that Blackwood received are not lucrative -- no assistantship ever is -- but they are a significant form of help. Tuition and fees for a Texas resident taking a six-hour semester load add up to about $1,060, but living costs still place a heavy burden. The university has approved an increase in salary for assistantships, from $8,276 to $10,003.50 yearly.

SWT prepares its students for life after the degree in three ways. The English department provides a technical writing program that M.F.A. participants can minor in. Grimes encourages students to apply for assistantships for the teaching experience. Many students also teach classes in Project Pass, a program that teaches creative writing to at-risk high-school students in the San Marcos area. All of these programs are résumé-builders for students who have accepted that they will probably depend on teaching, or other types of jobs, rather than literary writing, to pay their grocery bills. The SWT creative writing M.F.A. does not teach such skills as screenwriting. Grimes says that the purpose of his program is to teach students what makes good literature and help them to produce that literature themselves.

However, he says, "A writing program is not going to make you a writer. It can't. ... What we try and teach [students] is what Flannery O'Connor called 'habits of mind,' you know, the habits of the artistic life." A good writing program, Grimes says, can help a student decide whether they are ready for a writer's life.

Ernie Tscalis, who graduated in May of 1999, is finishing his first novel, Alarming Gestures. He says of his time in the M.F.A. program, "I really feel that I couldn't measure the amount of help I received." The program placed him in contact with the writing community -- the community of writers, published and unpublished, who are, he says, "as invested in your work as you are in your own." The support, both Blackwood and Tscalis agree, is invaluable to a writer. "For me, it made all the difference in the world," Blackwood says. "Being in an environment where I had time and encouragement was invaluable. I met so many people who were influential."

Blackwood is speaking of the Therese Kayser Lindsay program, which has brought a stellar assortment of authors and poets to the SWT campus, among them Rick Bass, Robert Creeley, and the late André Dubus. The value of this is immeasurable, Grimes says, as is the recent acquisition of the Roy F. and Joann Cole Mitte Chair. The Mitte Chair provides a salary of $120,000 to a distinguished writer who will stay and teach for one year at SWT. The first holder of the chair is National Book Award winner Tim O'Brien; the next will be Leslie Marmon Silko.

Tscalis tries to think of a problem with the program, some drawback or disappointment, and fails. He concludes, "This is really kind of a crazy thing to say, but I'm really hard-pressed to think of anything. ... Resources, community, connections -- it's all there. It's what you make of it."

How to apply: From the school's Web site: Applicants to the M.F.A. program must submit a portfolio of their work (15 poems or three short stories or 50 pages of a novel in three copies). Admission to the program is competitive and is determined primarily by the quality and promise of the applicant's poetry or prose. Portfolios will not be reviewed until applicants have applied for admission to the SWT Graduate School. Please send two letters of recommendation with your creative portfolio. If applying for a teaching assistantship or instructional assistantship, send three letters of recommendation.

Number of students: 40 in fiction, 18 in poetry