A Twist at the End Reviewed 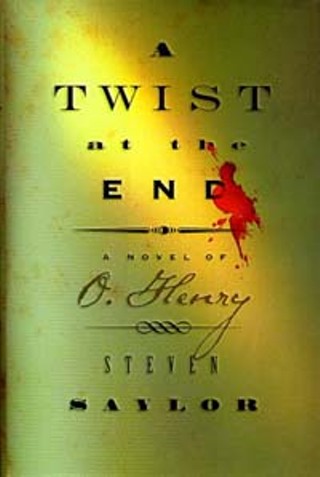 A Twist at the End: A Novel of O. Henry by Steven Saylor

As the dawn of the 20th century approached, eight horrific ax murders -- likely America's first serial killings -- chilled Austin's citizens to the bone. From the wee hours of December 31, 1884 with the slaying of Mollie Smith, a black cook and housemaid, through the Christmas Eve 1885 deaths of white housewives Eula Phillips and Susan Hancock, Austinites lived with the fear that their household might be next to fall victim. By the time the brutality ended, as suddenly and mysteriously as it had begun, the toll stood at eight: six women, a girl, and a man, all slain with axes in the shadows of night, the women raped.

One hundred and fifteen years later, the gruesome events were nearly lost to the passage of time before sometime-Austinite Steven Saylor appropriated them to serve as the framework for A Twist at the End: A Novel of O. Henry. An ingenious amalgam of fact and invention, Twist presents a wholly credible story built on historical bedrock featuring renowned writer and one-time Austinite O. Henry (born William Sydney Porter). Saylor carefully points out in his author's note that his work is fiction, above all else, although he "[has] portrayed those murders authentically down to the hour they were committed and the street addresses where they occurred." From that point forward, he weaves characters and events of the day with his own constructs to produce a seamless and marvelous novel.

This kind of intriguing and detailed historical background could easily obscure or derail a storyline. But Saylor's mystery tracks straight and true from start to finish. It begins with O. Henry in New York more than 20 years after the Austin "outrages." He has become a short story writer of some renown following some genuinely awful times: self-imposed exile to Honduras (on the run from the law), the death of his wife, and a jail stint for embezzlement. When a stranger appears with a letter promising a solution to the unsolved Servant Girl Annihilator killings (as he had regrettably dubbed them when he was just Will Porter, underemployed writer), he can't resist the temptation to return to Texas, where he believes the murderous fiend's name will be revealed. He boards a train post-haste, and the calendar turns back to 1884 to join young Will Porter in Austin at the time of the slayings.

Saylor throws any number of irons into the fire to give his tale breadth. Subplots abound. He concocts a romance between Will Porter and one of the victims. He makes Will the object of a blackmailing sister-in-law -- a true-life possibility advanced by some O. Henry biographers. He trots out a few love triangles (and mayhaps a parallelogram, too). He readily explores gender bias and segregation in their historical context -- adding surprising depth and a bit of edge to the proceedings.

The pacing is at once languid and excruciating as the stage is patiently set and the players introduced. The reader is immersed in the sights, sounds, and social fabric of a nearly post-frontier town at the turn of the century. With great subtlety and without awkward affectations, Saylor evokes the period's moods and tempos to good effect. Twist is not a bang-a-minute thriller, but the reader's patience is amply rewarded by novel's end.

A Twist at the End's appeal extends beyond the garden-variety whodunnit. Its meticulous research is apparent on every page, and it results in a fascinating historical document on several fronts. Saylor delves especially deeply into the racial divide that existed in post-Confederacy Texas. Six of the eight victims were black, and he tries to bring perspective to their lives. His frank but matter-of-fact depictions underscore the mundane cruelty of Austin's segregated society in the late 1800s. He also uncovers Senate Bill No. 79, a genuine legislative oddity of the period, which would have mandated that the state government fire half of its all-male clerk staff and replace them with women -- female clerks being an unheard-of concept in 1885.

The book's setting is doubly fascinating for Austin readers -- it provides an intriguing portrait of the city still in its infancy. The East/West streets of 1885 have not yet ceded their tree names (Pecan Street, Cedar Street, et al.) to numbers. Scholz Garten is alive and well -- apparently its popularity spans the centuries. And, of course, much is made of Guy Town, the long-since disappeared center of prostitution and hedonism that flourished in what is now known as the Warehouse District. In the book's 20-year span, Congress Avenue goes from dirt to paved and the new state Capitol building is constructed -- two signposts of the city's booming growth as it ushered in the 20th century.

A Twist at the End, Steven Saylor's eighth novel, marks a bold departure from his previous seven -- all part of his popular Roma Sub Rosa mystery series set in ancient Rome. But his skills travel well. Saylor writes with a flawless hand perfectly matched to his story's time and place. A Twist at the End is a stylish, sometimes gory, mystery that also opens a window onto a fascinating series of events in Texas history. And it serves as an homage to O. Henry -- there are twists enough, at the end and elsewhere. It's got history. It's got mystery. It's got depth, breadth, and originality to boot. Saylor's got a winner on his hands.