Ecology of a Cracker Childhood 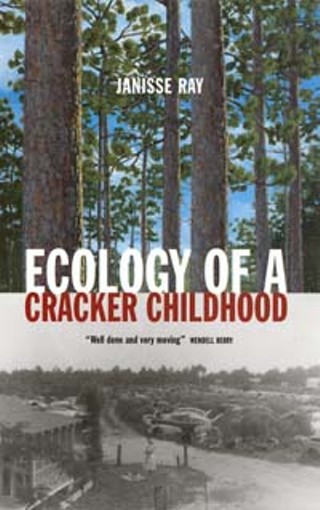 Ecology of a Cracker Childhood

The defining sentiment in Janisse Ray's Ecology of a Cracker Childhood comes early, spilled on the second page of a brief and lyrical introduction: "I was born from people who were born from people who were born from people who were born here. -- I carry the landscape inside like an ache." Her story is of the people and pines of South Georgia, a mix of nature, culture, and family history that aims to capture both "the cracker South and the longleaf South." Call it an environmental memoir -- and indeed, not many books can claim the twin Library of Congress headings "Childhood and Youth" and "Deforestation -- Georgia" -- and know that it's raised a few eyebrows: The dust jacket boasts an impressive batch of cover blurbs from some of nature writing's heavy hitters, including Wendell Berry, Bill McKibben, and Peter Mathiessen. Not bad for a little-known Georgia gal and a small Minnesota press.

The longleaf in question is the once-abundant longleaf pine, a sturdy tree that covered 85 million acres of the Southeast in its prime. Now fewer than 2 million acres remain, with less than 10,000 of these virgin forest. As the longleaf suffers, so do its neighbors: Of the 199 species of plant associated with the longleaf ecosystem, some 122 are endangered or threatened. The loss, Ray notes, is "apocalyptic"; without the pines, she adds, "My homeland is about as ugly as place gets."

It's a compelling story, briefly told: For all the pine cones on its pages, Ecology of a Cracker Childhood is a bit short on biology, or even cracklin' good natural history, and in later pages Ray resorts to imagined epistles from the late John James Audubon, authored from "the ethereal longleaf pine groves of our Lord." No matter: The memoir is better reading anyway, built from well-told tales of a skinned-knee girlhood in the junkyard flats of south Georgia. Ray's family history is by turns violent and serene; characters include a coon-huntin'í shine-runnin' Grandpa; an Apostolic father who took pleasure in 40-day fasts; and the requisite tough and tender ma whose heart ran as "pure as tupelo honey." Nostalgic, perhaps, but sung in a strong and evocative voice, tempered by only a few winceable dips into the melodramatic. (Note to author: Ditch the Thoreauvian trousers and stick to the [not so] simple act of description. It's where your power lies.)

Despite her wistful tone, Ray is fully aware that the loss of the Southern longleaf lies squarely at the feet of her ancestors, poor white folk who raped the land for timber and turpentine, giving scant thought to the forests' future. "These are my people," she intones solemnly at one point, "our legacy is ruination." And while Ray clearly aims to reverse that legacy, her memoir is at least as desperate as it is hopeful. Whether Ecology of a Cracker Childhood stands as a call to arms -- or just an early eulogy for an unsung pine and the people who used it up -- remains to be seen.