The Politics of Prose 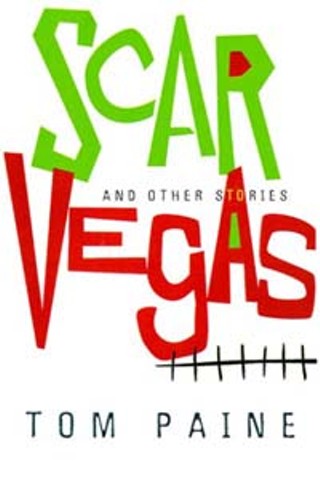 Scar Vegas and Other Stories

Tom Paine, named a "Writer on the Verge" in 1999 by The Village Voice, calls himself a practitioner of "new fictionalism," which is a blend of New Journalism and plot-heavy, old-fashioned storytelling. However he wants to classify his work, one thing is for certain: Tom Paine has delivered an exciting debut.

One of the most impressive things about Paine's book is the variety of voices he inhabits, as well as the many locales in which he situates his stories -- from Romania to the Virgin Islands to North Carolina. In the hilarious "Unapproved Minutes of the Carthage, Vermont, Zoning Board of Adjustment," he enters the head of the supposedly unbiased secretary who recounts the events of a heated town meeting, and in the stunning "The Battle of Khafji" a soldier witnesses the brutality of the Gulf War, which he terms "Operation Video Game" due to its high-tech methods of warfare.

Many of the stories in the collection feature characters who border on the pathetic: a dimwitted, skateboarding anarchist in "The Spoon Children"; the bastard mayor of a Caribbean island, still a bachelor at 42, in "The Mayor of St. John"; and a general in the Marines who has a penchant for wearing women's panties under his uniform in "General Markman's Last Stand." That the characters are somewhat pathetic isn't a problem in and of itself, but at times it seems as if Paine views these characters as objects of scorn, as losers -- an attitude that comes dangerously close to authorial smugness. This is a tiny quibble, one that doesn't detract from the many pleasures the book offers. And luckily, most of the time Paine bestows upon his hapless characters just enough humanity and sympathy to save them from a derisive fate.

Take the title story, for instance. Johnny Loop, an ex-con from Texas, travels to Vegas for his sister's wedding and finds himself in a casino being ogled by a woman who, as he puts it, "is ten times better looking than any woman who ever looked at me twice in my entire life." In the end, Johnny becomes the woman's victim, in a plot twist straight from an urban legend. But Johnny, so desperate for love and for someone to just notice him, finds a way to feel honored by his victimhood -- after all, the woman chose him "out of all the crowds of nobodies and losers." A loser, perhaps, but Johnny, in his desire for love and attention, is no different from any of us.

After reading this frenetic collection, the reader might feel exhausted, but it's the kind of exhaustion that sets in after returning from an exciting, eye-opening journey -- a journey on which Tom Paine has been an entertaining guide.