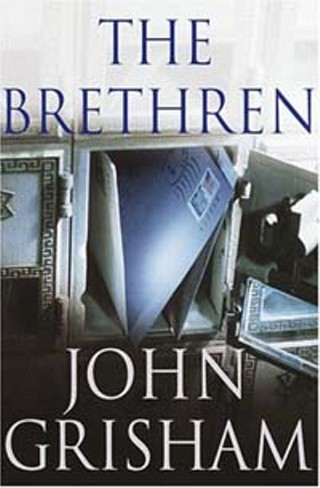 In the breakneck world of politics, everyone has a price. That sums up John Grisham's message in The Brethren, the prolific author's latest tale of crime and corruption in the ranks. Unfortunately, Grisham applies that mentality to each and every one of his characters, none of whom is remotely likable. His cast of morally bankrupt lawyers, congressmen, CIA agents, and other high-level miscreants lacks any semblance of humanity (maybe because they've firmly hidden it in their own closet). The title characters are a trio of imprisoned judges who extort money from affluent closet homosexuals through personal ads placed in gay men's magazines. Masquerading as innocent loners, the Brethren lure their unsuspecting pen pals into continued communication until they have enough blackmail information to demand money, for which they agree to guard the individual's sexual orientation from the media. Things go swimmingly for the Brethren until they find themselves in correspondence with Aaron Lake, an Arizona congressman running for president who conducts his homosexual affairs under the alias Al Konyers. Privy to all of this is the CIA, which has staged Lake's entire campaign so that he may take orders from them when it comes time to battle various international enemies.

Undermining The Brethren is the fact that none of this information is particularly believable. Can the CIA really buy votes in an entire presidential election? Does it matter? Grisham's preposterous narrative dotes on stale Cold War references that are just plain silly and outmoded (example: "The Russians were coming, and when Natty Chenkov and the new regime seized power the world would change forever."). Moreover, neither the Brethren nor Aaron Lake are written with the redemptive qualities have made Grisham's previous tragic heroes (such as The Firm's Mitch McDeer) so complex and compelling. Gone are the days when Grisham explored issues of personal corruption and integrity. In The Brethren, everyone sells out to the highest bidder. Those who read the book, however, are the ones who pay the price.