The Last King of Texas 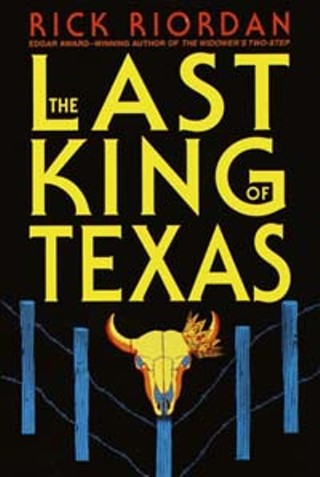 The Last King of Texas

A wisecracking P.I./English teacher, a San Antonio setting made authentic with generous doses of all the right Tex-Mex trappings, including Poquito Mas, Big Red, and Shiner Bock, and an enchilada-eating cat named Robert Johnson -- what's not to like about San Antonio mystery novelist Rick Riordan? The Last King of Texas (Bantam, 368 pp., $23.95), Riordan's third novel featuring series protagonist Tres Navarro, showcases the author's growing facility for producing page-turning murder mysteries custom-made to please fans of mainstream crime novelists like Robert Crais and Robert Parker who always wondered why no one ever had the bright idea of exploring the kooky dark corners and history-laden atmosphere of the Alamo City.

Like his protagonist, Riordan is a native San Antonio resident who had to move away to San Francisco for a few years in order to come back to his hometown and fall in love with it all over again. Riordan's love and empathy with the town is contagious, making it easy to empathize with his hero. The central mystery of The Last King of Texas is ostensibly about the murder of an English prof at the University of Texas at San Antonio, but the specter of a colorful, legendary character once known as the King of South Texas Carnivals slowly but surely moves to the forefront of the plot. Veteran mystery fans will recognize many of the tried-and-true conventions of the genre -- after being hired by the university to take over the murdered professor's teaching position, Navarro is warned not to investigate the case, despite the fact that it smells worse than spoiled menudo. Riordan's ear for dialogue in a place where cops call you "son" and waitresses call you "hon" has improved with each novel. His description of the Bexar County Jail/Sheriff's Department complex is a gritty gem:

If the cons ever got to look out the arrow-slit windows of the upper stories, they'd see the parallel one-way streets of Commerce and Buena Vista stretching west, through two miles of the worst heroin dealing and prostituting and gang-banging in the city. In other words, they'd see home. Commerce-Buena Vista was a conveyor belt, moving people from street to jail to street in regular, recursive cycles.

Riordan's previous paperback original novels have been honored with the Shamus, Edgar, and Anthony awards. With his third out in hardback, he earns the right to be proclaimed poet laureate of San Antonio's mean streets.

Sublett is the author of the Austin-based rock & roll mystery novels Rock Critic Murders and Tough Baby. Rick Riordan will be at Adventures in Crime & Space Saturday, February 5, from 4-6pm.