Any Old Way You Choose It 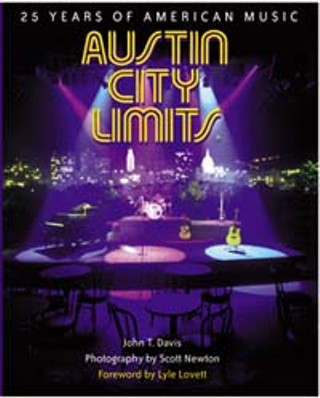 It's too bad nobody has yet invented a way to listen to books. A headphone jack on the spine, a little volume-control knob, and you're in business. Because with a book like Austin City Limits, no matter how glossy the photographs or how enlightening author John T. Davis' mini-history lessons are, if you can't hear the music, you're getting half the story.

What you get instead is a nifty timeline that throws out notable ACL events against simultaneous world and national happenings, including an inordinate amount of attention to M.C. Hammer's career peaks and valleys. Then nine chapters that separate the show into its essential elements: Legends, Country, Blues, Tejano and Conjunto, Singer-Songwriters, Women in Song, Lone Stars, Rising Stars, and None of the Above.

Davis writes that the show was a gamble in the beginning, back before Austin became known across the world for its abundance of live music and independent-minded artists. The first season alone saw performances by Rusty Wier, Townes Van Zandt, Doug Sahm, Alvin Crow & the Pleasant Valley Boys, Steve Fromholz, Greezy Wheels, and Marcia Ball. Even as the emphasis on local artists lessened in the succeeding seasons, the presence of luminaries from Merle Haggard and Hoyt Axton to Tom Waits and Doug Kershaw signaled ACL's growing significance as a public-television phenomenon that was uniquely Texan and singularly Austin.

Peppered throughout are numerous anecdotes relating especially memorable occasions or more personal asides to the show. Most are from longtime producer Terry Lickona, about Willie Nelson ("Without Willie Nelson there would be no Austin City Limits"), Lightnin' Hopkins, Ray Charles, Fats Domino, B.B. King, and the time an errant rat blacked out one-third of the UT campus, short-circuiting that evening's scheduled Kris Kristofferson show. (Kristofferson thus headed up to the roof to watch a thunderstorm.) Others include Davis' recounting of Emmylou Harris' night at Hole in the Wall after a 1988 taping; Robert Earl Keen on seeing his future wife (and her boyfriend) at Nanci Griffith's 1984 ACL debut; and Ray Benson on securing more stage time for Bob Wills' Original Texas Playboys on the first show of Season 1 (and second-ever after Nelson's pilot). According to the back index -- every show, every song -- the Playboys' set list was "San Antonio Rose," "Steel Guitar Rag," "Milk Cow Blues," "Keith's Waltz," and "Faded Love." Benson should get a medal.

There's a backstage section, featuring an as-it-happens walkthrough of the Bruce Hornsby/ Lucinda Williams December 1998 show (the first in ACL history with two completely different studio audiences and for a performer, Williams, to reshoot an entire appearance). A tres-Nineties "Frequently Asked Questions" chapter with every little byte of info you could possibly want to know about the PBS perennial included. And about 250 pictures by ACL house lensman Scott Newton that speak entirely for themselves. It's just too bad photographs can't sing.