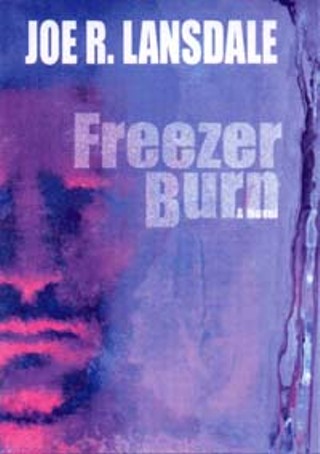 "Bill Roberts decided to rob the firecracker stand on account he didn't have a job and not a nickel's worth of money and his mother was dead and kind of freeze-dried in her bedroom." So begins Freezer Burn, Joe R. Lansdale's latest attempt to tweak the reading public's delicate sensibilities. This opening, though not a model of good taste, is the perfect introduction to Bill Roberts and his tale of self-induced misery. And it very likely separates readers into two distinct camps: those who plow ahead and those who drop the book like a two-headed viper. Those who continue will find that Lansdale has gleefully created one of modern fiction's most pathetically inept characters. Bill Roberts indeed robs the firecracker stand with two friends, but it's across the street from his house, for heaven's sake, and he's immediately recognized.

The resulting balls-up turns to carnage, the getaway car crashes, and Bill winds up alone slogging through miles of swampland amid vicious mosquito swarms. When he finally emerges and stumbles into a freak show's campground, his face and head are so horribly bug-bitten that the motley crew mistake him for one of their own kind. And so he finds the ideal place to hide out from the cops and figure out his next move.

But even among society's castoffs, Bill remains low man on the totem pole, and so he must share a trailer with a freezer containing the mysterious, never-to-be-thawed Ice Man. And so venal and habitually dishonest is he that he can't even maintain a freak-show lifestyle that requires no skill and only the merest semblance of decency. Karma and lust grease the skids for his inevitable slide to disaster.

Lansdale writes Roberts with barely a shred of sympathy, but not so the malformed and misfit freak show performers. He lavishes much time and attention on their lives and loves and lets their humanity shine through their grotesque appearances. Even Conrad the (human) Wonder Dog gets some loving.

Freezer Burn reaches into a dark place and pulls out a brutally comic portrait of a loser-man who can't seem to place the blame where it belongs -- in his own misguided self. Still, Lansdale celebrates the good soul -- wherever he can find it. And so he sets this black comedy against a background of genuine unfortunates trying to conjure up some semblance of dignity under impossible circumstances.

As always, Joe R. Lansdale is a treat -- though he's definitely black licorice in a gummy drop world.