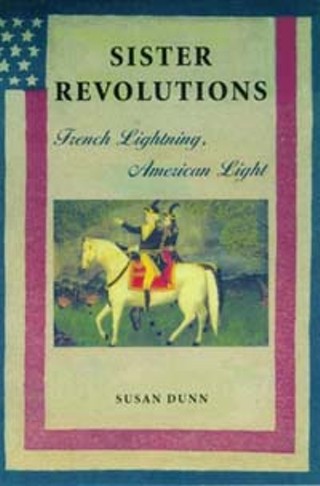 In R.R. Palmer's classic study, The Age of Democratic Revolutions, the French and American Revolutions are the brightest stones in a necklace of uprisings that stretched across the transatlantic world in the 18th century. Whereas Palmer famously surveyed the "common goals" of these two revolts, Susan Dunn -- professor of French literature at Williams College -- assays their substantial differences. To what end? "The sister revolutions of the eighteenth century hold invaluable lessons for our contemporary democracies. Not only do they illuminate our political assumptions, beliefs, and ideas, but they also help us to take the temperature of our political cultures, to diagnose our political ills, and to prescribe remedies for them."

To the American Revolution Dunn ascribes a harmonious synthesis of politics and ideas, and to its leaders virtues such as tolerance, civility, intelligence, modesty, self-restraint, and prudence. Their respect for history, protection of minorities, and acceptance of conflict meant that the election of 1800 would constitute a peaceful transfer of power from the Federalists to Thomas Jefferson's Republicans -- proof of the success of the Revolution and its aftermath. In France, by contrast, the air was fragrant with the scent of blood. Lusty for vengeance against their enemies, against the whole of the ancien régime -- indeed, against history itself -- the impulsive Jacobins imposed unanimity. The guillotine, not the ballot, arbitrated political conflict. And so a century would pass before France had republican government, observes Dunn.

Comparative history of this sort is notoriously difficult to execute, and even more difficult to render in a manner that satisfies a critical mass of readers, for it often leads scholars to sacrifice subtlety and nuance in favor of broad, sometimes crude arguments. Thus Dunn imparts a decidedly incomplete portrait of Jean-Jacques Rousseau, who remains among the best and most useful philosophers of self-government -- despite his ignominious French interpreters. And the makers of the American Constitution feared popular disorder, fought dissenters, and favored political compliance far more than her comparative framework implies. So learned Daniel Shays and his followers, disenfranchised women, blacks, and Native Americans, and victims of the Sedition Act of 1798.

A more important criticism concerns the book's tone. Sister Revolutions pursues general readers, who Dunn presumably hopes will use her text to think critically about the past. A worthy goal, and one furthered by her accessible, unpretentious prose. But Dunn's arguments sometimes approach the standard hagiography of high school textbooks: The American founders were the wisest and noblest of all men, the Constitution is a blessed document, the United States' form of government recommends itself to all present and future peoples of the world. These ideas may be more right than wrong, but citizens do themselves few favors by availing a celebratory attitude.

Her final chapters, which contain some perceptive observations, ultimately save Dunn from that dreaded charge. What to do with this book? Use it to start an argument. What sort of conflict sustains democracies? How do we reinvigorate our moribund political life? Sister Revolutions by no means offers clear answers, but it does justice to the importance of the questions.

The Fly Swatter: How My Grandfather Made His Way in the World