Swaggart: The Unauthorized Biography of an American Televangelist 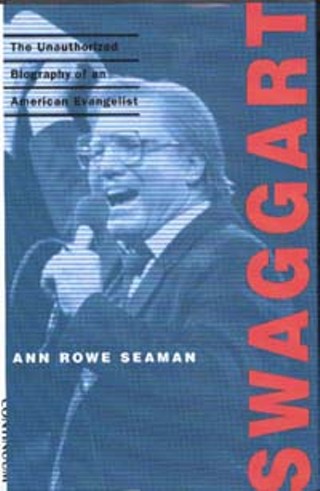 Swaggart: The Unauthorized Biography of an American Televangelist

In 1987, Jimmy Swaggart was one of the world's most popular televangelists, with a weekly television audience of 2.1 million in the United States and a worldwide audience of millions more. He had spent a lifetime climbing to fame, from a Faulknerian childhood of poverty and family discord in rural Louisiana through years of being a traveling preacher at churches where often the only place to sleep was a moldy basement with rats and roaches. The 1980s was his era of glory among evangelists, but by 1991 he was a figure of disgrace, brought down by trysts with prostitutes in seedy highway motels. Native Austinite Ann Rowe Seaman fittingly opens Swaggart with a description of one of these trysts; she uses the rest of her well-researched book to examine the factors which led to Swaggart's sex-induced fall from grace. In doing so, Seaman thoroughly mines Swaggart's childhood, family background, internal struggles with religion, competitive relationship with "bad boy" cousin Jerry Lee Lewis, and adult involvement with the increasingly polarized evangelical movement of the 1980s.

The most compelling theme Seaman explores is the contradictory messages of Pentecostalism, whose prescriptions are all about chastity and temperance, but whose ecstatic practices are suggestive of sexual energy. Whereas rock & roll (whose popularity grew in tandem with Pentecostalism's) is overtly sexual, Pentecostalism only hints at sex through the emotionally and physically draining rituals that accompany being "consumed" by the Holy Spirit: speaking in tongues, the laying on of hands, fevered singing and dancing. An evangelical preacher's job is to "arouse" his congregation, and turn that arousal into spiritual ecstasy, but "in order to do this, a preacher must be outside the realm of erotic vulnerability himself." Seaman surmises that Swaggart, who grew up in a religious household where guilt always accompanied sexual thoughts, never learned to face his sexuality, much less conquer it.

Such thoughtful analyses, often extensive and steeped in historical and cultural background, make for a compelling book which goes beyond the usual scope of biographies. Still, Swaggart also succeeds as a biography, largely because Seaman acknowledges her subject's complexity and approaches him with the respect and fairness any scrutinized life deserves. Rather than take the easy way and portray Swaggart as either a saint or an exploitative hypocrite, Seaman emerges with a picture of a man who is basically good yet beset with weaknesses. In other words, a real person.