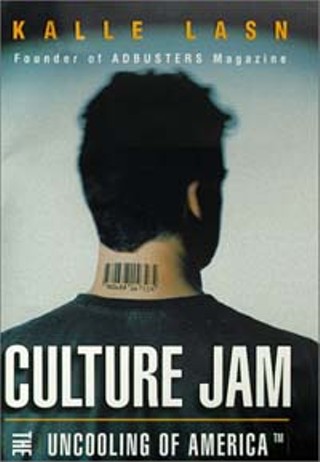 Culture Jam: The Uncooling of America

When you think Civil War, you think slavery, right? You don't think "birthplace of the corporation in America." Yet, the war allowed corporations to seize a foothold in the republic. Before the war, corporations were under the purview of individual states, not the federal government. But, because of the war, "corporations made huge profits from procurement contracts and took advantage of the disorder and corruption of the times to buy legislatures, judges and even presidents." As Kalle Lasn, author of Culture Jam: The Uncooling of America notes, Abraham Lincoln "foresaw terrible trouble" with this new situation. "Corporations," he said, "have been enthroned. -- An era of corruption in high places will follow and the money power will endeavor to prolong its reign by working on the prejudices of the people -- until wealth is aggregated in a few hands -- and the republic is destroyed." Today, the only republic still standing in America is Banana Republic -- imperialism now sells khakis.

Lasn is a documentary filmmaker and publisher of Adbusters magazine, as well as founder of the Adbusters Media Foundation. In New York this year, 400 people came out to support his national "Buy Nothing Day" campaign. And here's exactly where Lasn's fervor for overturning corporate America meets its nemesis -- people want things, they want to shop, they want to consume. Four hundred people not shopping in New York City on the busiest shopping day of the year, or protesters demonstrating in Seattle during the World Trade Organization's conference, is the equivalent of a grain of sand saying it no longer wants to be part of the beach.

The first half of Lasn's book sets out his thesis for where we are -- too much information, suffering caused by plenitude, wide-scale emotional depression, loss of empathy for one another, global media control. If you've never subscribed to The Nation or read Tom Frank's far stronger book, The Conquest of Cool, Lasn's ideas might sound fresh. Otherwise, they're redundant, and examined with little more depth than a soundbite.

In the second half of the book, Lasn sets out his strategy for "uncooling" corporate products by producing "subvertisements." He's made a few himself and, since they criticize products, they're offensive to corporate advertisers. So offensive that only CNN would agree to air Lasn's ads for money. Lasn isn't wrong; huge corporations, which serve their own interests, dominate the airwaves. In addition to his pinpointing of the birth of the corporation, he reminds us that in the case of "Santa Clara County vs. Southern Pacific Railroad, a dispute over a railroad route, the U.S. Supreme Court deemed that a private corporation was a "natural person' under the U.S. Constitution and therefore entitled to protection under the Bill of Rights. Suddenly, corporations enjoyed all the rights and sovereignty previously enjoyed only by the people, including the right to free speech."

The consequences of this landmark legal blunder, which Supreme Court Justice William O. Douglas later claimed "could not be supported by history, logic or reason" changed democracy. "By 1919, corporations employed more than 80% of the workforce and produced most of America's wealth," and we were on our way to becoming the Mall of America. By pointing out these key facts, Lasn does a great public service. But his strategies for reversing the situation are based in unreality.

He advocates that we write letters to the editor, that we ask the telemarketer if we can have her home phone number, that "fans insist that stadiums be named after their heroes, not corporations." We need more public broadcasting, he claims. Well, the Web functioned for a time as public broadcasting, and its major product was porn. Do we really need more chat rooms dedicated to piss fantasies? Like Christopher Lasch before him, Lasn has a nostalgic, almost Capraesque faith in the geniality and goodness of man. You want the real heart of public broadcasting, listen to a white supremacist station after midnight. You'll be screaming for government regulation. Instead, Lasn imagines that as "we reverse the spin cycle -- demarket our news, our entertainment, our lifestyles and desires -- and, eventually, maybe even our dreams," we will rebuild a world in which "families get food from their gardens (sic!) and "therapy' from each other, from friends, neighbors and community." Right, we'll just call the local hate group's radio station and ask them to feel our pain.

I agree with Lasn's basic premise, that corporations have grown far too big and powerful. In Italy, the owner of most TV, radio, publishing, and advertising businesses has now installed himself as a politician, and will likely become Prime Minister. If you'd really like to understand the global power of the media, read the November 29 issue of The Nation. However, I disagree with Lasn that "culture jamming" has a prayer of succeeding. Instead, I imagine that, like the Berlin Wall, which startled everyone when it fell, corporate capitalism will fall one day as well. But it will not be the result of 400 people refusing to shop, but of excess, of leviathan-like bloat. It will get too big, profits will become too slim, the homogeneity of products will imperceptibly lead to a slowing of sales -- note the record industry in the Nineties -- and it will die of what Lasn calls the source of our suffering -- plenitude. In the meantime, I choose not to be cruel to my telemarketers. They have awful jobs, ones they don't want. So, I'm not going to take it out on them. I just tell them I'm not going to buy anything, then I hang up politely. In a corporately barbarian culture, civility is a weapon too.

The Uncooling of America, Kalle Lasn