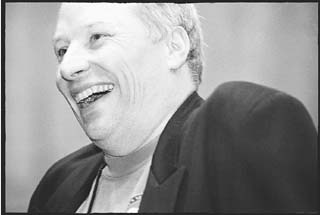 How much of a risk was it for the Texas Book Festival to devote an hour-long slot to the proposition that two incurably wise-ass writers could transfer their unique surrealisimo from the page to the stage? None at all, it seems. Joe R. Lansdale (Freezer Burn, Bad Chili) and Neal Barrett Jr. (Pink Vodka Blues, Interstate Dreams) kept the Sunday matinee crowd in stitches with their unmoderated, unadulterated walk on a verbal high wire.

"The Neal and Joe Show: Bigger, Longer, Uncut" was likely the most unusual session of the two-day festival. But in an odd way it was a loving, irreverent distillation of an entire weekend of panels. It was a roomful of book lovers basking in the warm (perhaps slightly radioactive) glow of two of their own kind who happen to have achieved some success at the writing game. Though entertainment was Job One, between the laughs and silliness there were two lifetimes of experience and insight to be gleaned.

Lansdale, who talks exactly like he writes, is a virtuoso when he plays a live audience simply because he's got awesome tools for the task: a fertile imagination and a febrile tongue. The result is pungent observation and stream-of-consciousness genius. On the other chair, Barrett relies on laconic delivery to mine his fair share of laughs and he unflinchingly absorbs Lansdale's verbal jabs and counter-punch-lines.

Have they ever collaborated, someone asks? The longtime friends wonder aloud why DC didn't buy their Batman comic featuring Abe Lincoln as a St. Louis greengrocer. One collaboration that made it into print: Supergirl as sheriff in an alternate universe where all the crooks are cows. The bad bovines get liquored up and terrorize the town -- as evil farm animals are wont to do. Sheriff Supergirl must take the bulls by the horns (so to speak) and tell them "we don't want your kind around here." Perfectly plausible, they agree.

As the satisfied crowd prepares to leave, one hopeful questioner asks if a new Hap and Leonard novel is on the way. Landsdale answers that his next will be a 1930s crime novel, to be followed by the return of the much-beloved Hap and Leonard. It seems that the East Texas misfits take a vacation in Mexico -- a cruise, actually - and, says Joe, "It doesn't go well."