Robert Creeley, Feeling for the Edge 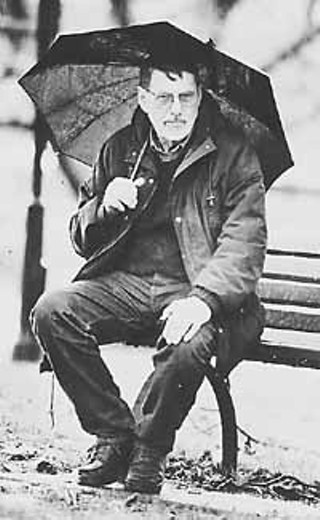 It's tempting to think of Robert Creeley as one of the "good gray poets" of postmodern America. After all, a poet must be fairly distinguished to win the Bollingen Prize, Yale University Library's semiannual award for the best book of poems or lifetime achievement in poetry. When Creeley took the prize this year, those achievements included 50 books of verse and prose, a profusion of national honors, and a term as State Poet of New York (from 1989-1991). Faced with all this official distinction, a casual spectator might not realize just how much Creeley's long literary career -- he's 73 this year -- has been conducted on the edge. He's not only had a finger on the pulse of American poetry, he's usually been a heartbeat or two ahead of it, whether of the Beats, the Confessional school, or most recently the assorted avant-garde who style themselves Language Poets. It's arguable that poetry slammers across the nation owe their spots onstage to Creeley, whose practice and theory broke ground for a host of new possibilities for performance. His influence has run through many other channels: teacher, critic, essayist, collaborator with painters and musicians -- even lending a recital of his poem "So There" to the neo-psychedelic indie rock band Mercury Rev (two of them are former students from SUNY-Buffalo, where he's taught since 1965).

Creeley's influence ranges as far back as 1954, when he was invited to teach at the experimental Black Mountain College in North Carolina. There, he began his long association with a group of poets -- Charles Olson, Robert Duncan, and Denise Levertov, among others -- a loose company of shared influence and inspiration that was to point American poetry down an entirely new road.

In a poetry scene whose standards were increasingly dictated by the academy, the "Black Mountain Poets" sought models elsewhere. "We turned to the other arts to find company and example," Creeley recalls. Abstract Expressionist painting, jazz, and modern dance all contributed toward an insistence "that speech and poetry were facts of body, not mind, although they were not critical of mind as a possibility." For Creeley and his companions, a poem was less a thing to be put together, and more an outward expression of breath, taking its contours from the speaking voice. "The given forms of that time were often ironic in tone, depended upon a literary rhetoric," he says. "I was insistent on address, in the way you would address another person. That way I could make manifest the intensity of emotions and situations."

One of the forms Creeley manifested was a lyric of very slender means, stripped down to a language that Robert Lee calls "recursive." An Austin poet and alumnus of the Michener Center for Writers, Lee finds especially attractive the "finite, huddled, economic" qualities of Creeley's verse unadorned, indirect, even evasive. As poems go, they're the strong, silent type. Paired with their reticence, however, is a syncopated rhythm, tapped out by lines breaking against the grain of the syntax. "I was trying to think of a way to open things up or make possible the feelings I was having: confusions, various emotional despairs," Creeley says of early poems such as "For Love":

Yesterday, I wanted to
speak of it, that sense above
the others to me
important because all
that I know derives
from what it teaches me --
Let me stumble into
not the confession but
the obsession I begin with
now --

The impression is of hesitance, the voice "stumbling" over words, in the grip of some powerful feeling left unnamed and unresolved. It's that lack of resolution, the unwillingness to tie up the loose ends, that distinguishes Creeley's voice. "It's not about emotional closure," Lee says.

If Ginsberg is the Whitman of our century -- large lungs exhaling long lines -- then Creeley is probably its Emily Dickinson. The occasions of his poems are more private than public, little rooms for poet and companion to share, where the listener often feels like a confidant, or even an eavesdropper. The overwhelming pressure of intimacy in these lyrics has led some to lump Creeley together with "Confessional Poets" such as Anne Sexton and Robert Lowell. Lee thinks otherwise, arguing that "he doesn't really belong there."

If one were inclined to classify, Creeley might fit just as well in the company of the Beats, fellow San Franciscans of the late Fifties. The much-anthologized poem "I Know a Man" hints at the off-the-cuff energy of Kerouac, the entire plot of On the Road strapped into four terse stanzas. Still, Lee points out, "never is he totally affiliated with the avant-garde. He's a role model for those who consider themselves independents."

Classification doesn't get one very far with Creeley. Never one to settle on anything, his later books, such as Pieces (1968), "try to let go of the sense of each poem being a specific formal unit," experimenting instead with "a long serial pattern, that would let me say anything that would come to mind." In the poem "As Real as thinking":

A period
at the end of the sentence
which
began it was
into a present,
a presence
saying
something
as it goes.

Bebop jazz provides a model, the freedom to improvise, to make it up as you go along. Such poems not only evade the label of a subject, they often break with the strictures of syntax. "Oh yes, the sentence," Creeley once quipped, "that's what we call it when we put someone in jail." Pronouns drop out, and language is short-circuited when two words are coupled into a new idiom -- as in "beganinto."

Such poems are held together by "the binding effect" of rhythm. "One could say things that were apparently quite disparate," Creeley explains, "but if they had a sound and rhythm in common, they came together, and the sense would be brought to being in the same term." It's easy to hear this freewheeling style of composition -- one might call it hooked-on-sonics -- in a poem like "So There." Beginning with the count-off "Da. Da. Da da," the poem's exuberant groupings of image are kept from spinning off by the often goofy rhymes, like the nonsense syllables of scat singing:

Moving on. Mr. Ocean,
Mr. Sky's
got the biggest blue eyes
in creation --

Creeley's lifelong experiment might be summed up in this statement: "I'm trying to find a form particular to what one is as a person." Appropriate, then, for his latest volume Life and Death, to embody his own "sense of being an old man." The poem's harder edges are muted: The lines are often longer, not as broken, incorporating more history, more memory. "I didn't have the emotional rush of the earlier poems," he explains. "The poems don't play football these days. Not that they sit and rock on the porch."

Far from it. Poems such as "Histoire de Florida" show Creeley's most wry face, tracing that state's lineage from Ponce de Leon and the fountain of youth to a retirement community:

So it may be we all now look
for where the first of these old folks went down,
seeing his own face in the placid creek

An aging face in the mirror often replaces the other bodies, the companions to whom so many of the early poems are addressed. Life and Death attempts to apprehend the prospect of aging and death: the prospect we all share, but experience only in the absence of company, the perfect privacy.

The poems reflect "a different kind of experimentalism," a tone that Creeley characterizes as "very easy, common without being phony. I really like cliché, and I wanted something that would be very familiar, very hackneyed." Such unassuming language only makes the poems more convincing, as in the final series "In My Head," conceived in collaboration with painter Francesco Clemente:

The "common tunes" behind these poems have, Creeley feels, more in common with country & western than with the jazzy strains of his earlier work. "My great hero for the kind of language I'm trying to get to would be Hank Williams. I like his directness and simplicity."

The final satisfaction of these, as with all of Creeley's poems, is the ease with which they translate into the spoken word. To hear Creeley read, for all his unassuming modesty, is to be invited into an act of a mind working itself out, feeling around for the edges of lines, for the edge of understanding. It's almost as if the poems are reading him.

Creeley is, one could say, a contemporary in the truest sense of the word: a poet with his own time, as well as with ours.

Craig Arnold's first book of poems, Shells, was last year's winner of the Yale Series of Younger Poets. He is Visiting Writer in the UT English department this semester.

Robert Creeley will give a reading at Southwest Texas State University on Tuesday, November 16 at 7pm in Flowers Hall, room 341. Call 512/245-2163 for directions or more information.