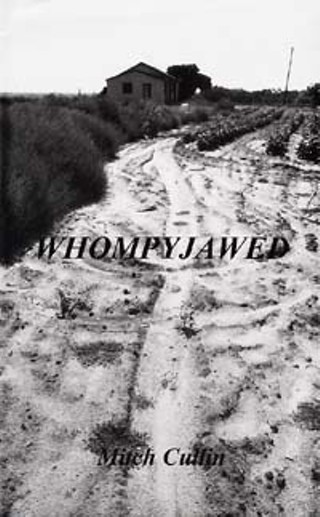 There's an idea in Texas lit that contemporary fiction about Texas must address the role its cities play in shaping the modern ethos of the state. But why? If it's the idea that fictional consideration of modern urban life in Texas should be expanded at the expense of treating Texas' rural elements (because that's been done already, hasn't it?), a little book from a little press on Long Island begs otherwise. Whompyjawed is the uproarious, barbed, and, yes, sensitive autobiographical account of the early life of Willy Keeler, football star. Of Claude High School, Home of the Fighting Tigers.

Part Greater Tuna with a decided cue taken from The Last Picture Show, Whompyjawed is about Willy's dawning realization that coaches, family, friends -- the whole town, really -- has a dubious interest in what is certain to be his precipitous rise to the top of the football pantheon, which you could say is the most popular pantheon in this place if it weren't for all those holy rollers carping about Jesus Christ. Early in the book, Willy's head coach, Coach Bud, takes Willy aside after "a hell of a good game" and the following exchange occurs:

"Know who was up in them stands tonight?"

I shake my head like I don't know, but I got a pretty good idea.

He leans forward over the desk. "Two more recruiters," he almost whispers.

"TCU," he tells me, "but that don't matter. That's chickenshit as far as I'm concerned. Point is -- they're all starting to come in now. And everybody knows what everybody else is doing. That means the big boys are going to be getting serious about you real soon, and that's when I'm going to start sorting the wheat from the chaff. I got eighteen colleges asking about you, Willy -- eighteen!"

Willy has expectations to live up to. His mother, a raving lout who drives to Amarillo to work as a hostess at catered banquets, barely shoulders her burden of the family load. Willy likens her to a tornado "that just blows through once or twice a day, shaking everything apart, and then leaves so everyone else can straighten the mess." Willy has a younger brother, Joel, to whom he basically acts as a father because their father is nowhere to be found. His girlfriend Hanna's father is the stern and disapproving principal of the high school, and she just refuses to have sex with Willy, though she daily declaims her love for him in poems that feature such verses as "Our love makes waves," and "He dreams of rainbow catches, she wills it so."

Despite the stark desperation that is part and parcel of growing up in Claude (Cullin himself grew up in Guthrie) and Willy's awareness that it is a one-track town, Whompyjawed is not a novel that decries the small-town Texas mentality. It satirizes it, certainly, but the satire is evocative, perhaps even fond. At one point, Willy is alone with Hanna and he absentmindedly says "Goddammit" to which Hanna replies, "Don't do that to the Lord." Willy is prone to all sorts of ruminations: "What gets me going about Whitey is that he's black. I've never asked him, but ten bucks says that ain't his real name. Maybe he just got called Whitey because he's the only black man in town who owns a business. That's how it is here. If a guy's fat, someone just might label him Slim."

Sometimes those ruminations reveal more than Willy intends. Whompyjawed is suffused with Willy's "aw-shucks," naive sensibility, so it's jarring when he uses vocabulary that clearly is the result of extracurricular reading. "Each time I trudged on into the huddle, my face was dirtier and stickier with my own swelter," he says at one point. Earlier, he observes that "In this town it don't take much to get people rigored and disgusted about the tiniest of things." Both a budding football star and budding poet, perhaps, though I think it's more likely a case of the author evincing frustration with the literary limitations an adolescent first-person narrator in small-town Texas imposes.

Cullin lays out a universe here, and if it's one that seems familiar and already tread, the perception is only partly correct. Whompyjawed does aim for familiar targets -- lots of football, sex, and teetotaling -- but Willy's voice is unique. He's not from the city; he's attuned to "the wind blowing dust and bits of trash along the sidewalks and gutters downtown, not a soul in sight."

Mitch Cullin will be a panelist on the "One Small Step for Mankind, One Giant Step for Me!: First Novels" panel during the Texas Book Festival on Saturday, November 6 at 12:45pm in the Texas Capitol, Capitol Extension Room E2.014.