Ahab's Wife, or The Star-Gazer

Sena Jeter Naslund's novel Ahab's Wife is very much like a romance novel with an English degree. If you don't remember Ahab's wife from Melville's novel, don't worry, because neither did he.

Arguably the most hypermasculine American writer next to Hemingway, Melville allowed Ahab only a scant few lines for a character that Naslund harnesses to an epic-sized novel. Over hundreds of pages, Una, Ahab's young bride, tells her life story. Magically born a proto-feminist and agnostic (how she arrived at such free thinking is unfortunately left a mystery), she is sent by her kindly mother to be raised by her liberal aunt and uncle because her father is a violent, religious zealot who intends to beat piety into her. She lives an idyllic few years at the relatives' lighthouse home and then, at the age of 16, two articulate, self-taught sailors, Giles and Kit, arrive at the lighthouse and really get things going. Torn between these two young men, Una impetuously decides to go to sea, disguises herself as a boy, and presents herself at their vessel.

This turns out to be a bad mistake; soon enough, of course, her disguise is revealed, the relationship between the two men is discovered to be slightly more erotic than Una realized (naturally this does not surprise or shock her but, hey, it's 1837), and they meet up with a whale of their own, one that promptly wrecks the ship and strands the crew on a deserted island. Starved and thirst-ridden, the survivors resort to cannibalism to survive. Rescued by the Pequod, Una marries Kit, even though he is in the throes of complete madness, and she watches Giles commit suicide from the ship's nest. She also meets Ahab, who turns out to be sympathetic toward women, wary of the violence of his trade, and an agnostic to boot. This characterization of the famously enigmatic sea captain owes more to Oprah than Melville.

Naslund's prose style is fine, although her characters' dialogue sounds too much like modern speech. It abounds in anachronisms and careless historical errors. Ahab's Wife is a book shaped by ideology, with its heroine as the perfect vessel. Throughout the course of the book, despite an avalanche of tragedies, Una stays basically the same; she never doubts, she never wavers, because she is never really challenged. Consequently, she's of little interest as a heroine. Naslund is so in love with her heroine that she has forgotten that a writer's greatest gift to a character is to make her real, to foster a connection between character and reader, not idealize her beyond all proportion as Naslund has. Naslund requires that her star be handsome, rich, and clever, but unlike Jane Austen's heroines, this one never encounters any internal conflict.

One suspects that Naslund sees the essential shapelessness of this novel's plot as a subtle virtue. However, unrolling a litany of anecdotes, adventures, and celebrations can add up to nothing in the end. Una is no different than when we first encounter her, and, most surprisingly, she seems to embrace a very traditional fate -- a common-law marriage with an appealing man, a daughter named Felicity, and a community which fosters her diecast ideas. That's what all this Sturm und Drang was about? No amount of purple, metaphysical prose or interior character ruminations can hide a novel's weak core.

Naslund can't see how historical novels gain by using precise detail. The interactions of her characters seem shallow and meaningless. When Margaret Fuller, Frederick Douglass, and Maria and William Mitchell appear, they are used like drop-ins on a sitcom; they don't speak like actual characters, they merely paraphrase their own ideas. Use of these characters often approaches unintentional camp. When a fire engulfs a town, Maria Mitchell "saved the Methodist Church. They were blasting the buildings. It was next, but she made an observation about the convection currents at the head of Main Street and refused to move from the steps." Of course she did.

But possibly the most curious and annoying aspect of this novel is its latent conservative core. Not only does Una end up with the most traditional of fates, but Naslund also undermines the potency of the liberal ideology she preaches by domesticating and taming the radical philosophies of her historical characters. Fuller and Douglass are transformed into benevolent personas that merely smile at Una's ideas and nod their heads at her headstrong ways.

Ahab's Wife tries to make a great leap to join Melville on the shelf. It's understandable that Naslund would want to endow a monumental American work with a feminine sensibility. But Naslund undermines her own ideas by sacrificing artistic craft and sensibility for an agenda. In this case, the end leaves us with much less than promised. 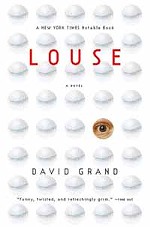