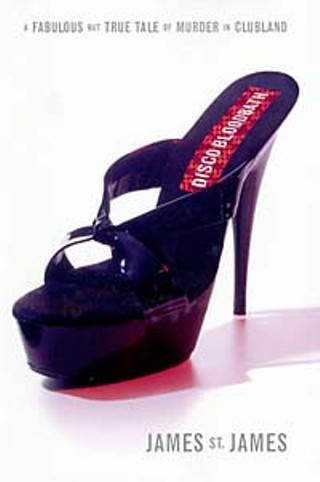 The quiescent days of New York's trendy club nightlife were in shambles by the mid-Nineties. The scene had self-destructed slowly since its Eighties heyday of dance-all-night places like Area, Pyramid, Danceteria, the Tunnel, and the Limelight turned it into a drug-addled caricature of its former glory. And if it hadn't self-destructed, the murder of Angel Melendez would have dealt one of the final blows.

Disco Bloodbath is the dishy true crime debut of James St. James, a self-proclaimed "clubkid" who just happened to have been on the inside of this gruesome tale, knew the killers and the victims, but wastes little sympathy on them. There's killer #1 -- Michael Alig, the coked-out, social-climbing, dress-for-excess club manager in search of the ultimate high who kept a body in the bathtub. There's killer #2 -- Freeze, the chaps-wearing scenester/hustler/druggie who wields the hammer. There's the ultimately enigmatic victim, unctuous drug dealer Angel Melendez. There are excruciatingly drawn characters like Mavis, the lesbian accountant who invested her life savings in cocaine and ended up hideously strung out. Guest appearances from Village Voice columnist Michael Musto, former Deee-Lite singer Lady Miss Kier, celebrity queen Dianne Brill, and the ultimate New York name to drop when you could, Andy Warhol, keep the scenes rolling at a horrific pace in this relatively short book.

The murder of Melendez happens early; he then disappears and doesn't surface again until much later. This is where the stylish effort coupled with St. James' over-the-top fashion will lose some of the traditional true crime fans who aren't prepared for the queeny, Oh, Mary! tone it often takes. By the first quarter of the book we understand that this is a tale of wretched excess and are already itching for something to happen, waiting for the victim to appear. What we get are further portraits of degradation and drug abuse that soon become stomach-turning when combined with the events of the murder. By the last 100 pages the story is careening toward the inevitable crash, and cocaine, heroin, crack, speed, and an insidious drug called K favored by the author fill in the holes in the scene when the victim finally reappears and everything goes to hell.

Disco Bloodbath can't be termed "taut" because its casual tone is too blasé, though that's not to say St. James hasn't done a good job. He didn't dumb down the circumstances to appeal to a mass audience, and his uncompromising stance works. Anyone who's ever danced to an electronic throb with amyl nitrate in the air knows the world he once inhabited -- a dark one that is too often shabby by the light of day.