Tweet
print
write a letter
Some things that Tom Zigal says simply need to see the light of day. Here are several salty and insightful selections:

On meeting Wallace Stegner, the founder of the Stanford Writing Program:

"I met him once at a party. He had had a few drinks, as was his wont. I asked him about Ken Kesey and he looked at me coldly and scowled, ŒKesey writes with his dick.' I thought it over. ŒHmm,' I said. ŒWould that be blue ink or black ink?' He wasn't amused."

On whether Zigal can take credit for James Crumley naming his characters out of a Seventies Austin phone book:

"One night, when he was visiting me here in Austin in the early Eighties, he was lamenting the fact that he'd named a prominent character ŒBetty Sue Flowers.' He hoped it hadn't hurt Betty Sue's feelings. I said, ŒWell, hell, Jimbo, let's call her up and see how she feels about it.' We had had a small libation or two. I called Betty Sue and whispered that this was her chance to give him hell. So she came on the line and pretended to be pissed at Crumley. She acted wonderfully insulted and insisted that he had ruined her life and reputation. Crumley bit. He began to blubber apologies and beg forgiveness. Then she laughed and hung up and that was that. I've never told him he'd been set up." [The real Betty Sue Flowers is a UT English department professor and poet and Crumley's Betty Sue Flowers in The Last Good Kiss is a beautiful blond runaway who ends up making porno films.]

On mystery fiction as literary art:

"At its best, the crime novel is an exquisite creation, uniquely American, and as admirable as the best Œserious literary fiction.' The Modern Library editions have finally recognized that by canonizing Chandler, Cain, and Hammett. You can't convince me that Steinbeck is better than Chandler, and should be taken more seriously. Maybe The Grapes of Wrath is a cut above Chandler's best, but my lord, nothing else. And I don't believe that Richard Ford is better than James Lee Burke. Au contraire. The literary novel at the end of this century is hurting, primarily because of lack of passion, conviction, and scope. Most lit novels are dying of anemia, as Tom Wolfe points out. But you won't find ennui, angst, or other French emotional disorders dominating a good mystery novel." 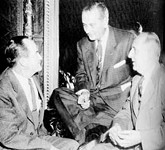