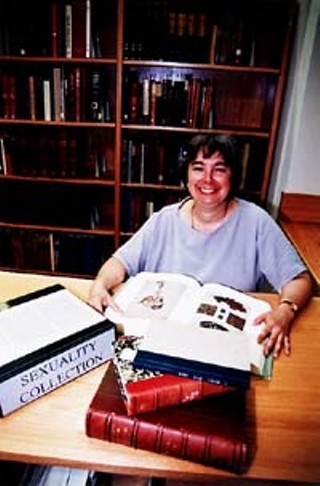 The year was 1967. W.R. Robbins, the principal of Austin High, was waiting for Rachel Maines to come to his office. He had just dealt with Patty London, a classmate of Maines and the editor of the school newspaper, threatening her with expulsion until she promised she would not say or do or publish anything of a "leftist" nature on school premises. London cratered. Now it was Maines' turn. The article which had caused Robbins to lose it concerned the Vietnam draft. Maines and London had interviewed several senior males who said they supported the war but planned to do everything in their power to avoid having to fight it. This came on the heels of another article by Maines entitled "Schools Squelch Smut" about the ban on The Rag, an underground newspaper, in high schools.

Robbins started in on Maines but she refused to buckle. Then he threatened to call her parents. "When my mother answered the phone," Maines says, "Robbins asked if she knew what her daughter was doing at school. My mother said, "Yes, and she has our complete support.' Then Robbins called the superintendent's office to see if he could have me expelled. The superintendent asked what my grades were like. When I said, "straight A's,' Robbins hung up the phone. The next morning, thanks to my mother, two members of the American Civil Liberties Union were waiting for Robbins to explain that students are not exempt from the Bill of Rights." Because of that seminal episode, Maines dedicates her first book, The Technology of Orgasm: "Hysteria," the Vibrator, and Women's Sexual Satisfaction (Johns Hopkins University Press, $22 hard) to her mother, who "taught me that intellectual freedom is worth fighting for." Not surprisingly, the book has caused more than a few challenges to that freedom.

Soon after Maines published her first article on the topic in 1986, Clarkson University terminated her teaching contract, stating that their alumni would probably not support its faculty doing research on vibrators. A similar article in 1989 in Technology and Society, a publication of the Institute of Electrical and Electronic Engineers (IEEE), caused the Advisory Board of the IEEE to threaten to withdraw the publication's charter on the grounds that the elaborately referenced article was a parody: There couldn't possibly be anyone named Rachel Maines who'd written such an article.

There's a reason Maines has survived the various assaults on her intellectual freedom. She's smart, she's funny, and she dances circles around reactionary, clod-like thinking. The Technology of Orgasm is a stunning book, not just for the depth of its research and command of its subject but also for its humor and irony and pointed conjectures about gaps in medical knowledge.

"I'd say it's the bestseller in our technology books," says Bob Brugger, Maines' editor at Johns Hopkins University Press. "We're already in our third printing and the reviews are still coming in. It's sort of crossed over to be a more popular book." In its 120 pages, The Technology of Orgasm spans over 400 years of physicians' solutions to a female condition they called "hysteria" (literally "womb disease"). Maines tracks the research doggedly and in the opening paragraphs of her book levels the first volley at historians who have long ignored the ubiquitous presence of these descriptions and hence ignored substantial documentation about women's health and sexuality.

According to Maines, women had been going to doctors complaining of headaches, irritability, and fear of impending insanity for centuries. Description of the "disease" and its treatment first appear in the Hippocratic corpus and continue throughout the centuries until the American Psychiatric Association dropped the term in 1952. What these physicians found were women engorged with unexpended "seed" (semen in Latin). Some described the inflamed uterus as choking or suffocating the patient.

The cure was to coax the organ back into position and to cause the expulsion of fluids. Just how that expulsion of fluids occurred depended on the woman. Masturbation was not an option. Horseback riding was encouraged. Getting married was recommended. Being "strongly encountered by one's husband" was prescribed. But if you were a nun or a widow, you had the following option, according to Pieter van Foreest, who postulated in 1653 that "when these symptoms indicate, we think it necessary to ask a midwife to assist, so that she can massage the genitalia with one finger inside, using oil of lilies, musk root, crocus or [something] similar. And in this way the afflicted woman can be aroused to the paroxysm."

The ads caught Maines' eye. As she describes it, she was a feminist ripe for the plucking: 27, angry, between marriages, and inclined to interpret everything as a manifestation of the war between the sexes. "I had had my "click' experience described by so many feminists in the Seventies," says Maines. "I was interested in textile arts and couldn't figure out why there were no serious, well-researched books on the subject. All of a sudden it dawned on me that it was because women did it and I became determined to write a serious needlework history come hell or high water." 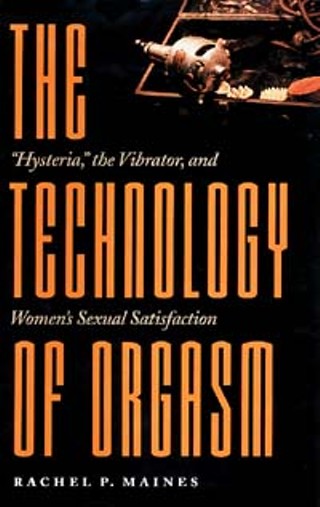 The discovery led to a grant from the Bakken as well as an invitation to become a Bakken Fellow. That, in turn, led to her first published article on the topic. Normally, universities are delighted when the professors receive grants and fellowships. But Clarkson did not know how to embrace Maines' achievement. In their faculty newsletter, it was noted that Maines received a grant-in-aid from the Bakken Library and stated, "She will use the grant to study the impact of small electrical appliances in the home."

Maines knew she was pretty far out on the limb. As she traveled to different universities to present her findings, she saw how the subject polarized audiences. "Most males took my findings personally and resented them," says Maines. "Women were usually embarrassed but wanted to hear more, especially if there were no men in the room." But the administration of Clarkson University proved to be the most reactionary of all. In 1986, the School of Management did not renew Maines' teaching contract, citing "an energy level that wasn't compatible with the rest of the faculty" and speculation that alumni would stop giving money to the school if it was discovered that a member of the faculty was doing research on vibrators. "People told me this topic would torpedo my academic career," says Maines, matter-of-factly. "It did."

"Any time you pursue a topic that exists in the margins of history, it's a risk," says Joel Tarr, the Doctorate Dissertation Director at Carnegie Mellon University. "But if there was anyone who could carry it off, it's Rachel. I tried to steer her more toward environmental history during her doctorate. She wouldn't have it. She has a strong personality. She's very thorough. And she has a lot of integrity."

By the time Maines was fired, however, she knew she had a book in the making. During her fellowship at the Bakken, she found an 1883 article at the Bakken written by the French physician Auguste Tripier that asserted the positive effects of massaging women to orgasm in the treatment of hysteria. "It was the first time I'd found a medical statement that concurred with what I had long suspected," says Maines.

Even so, Maines knew she couldn't quit her day job to write a scholarly book, no matter how popular it might become. But instead of scrambling for a teaching position at another University, Maines climbed out on another limb and started her own business, Maines & Associates, which provides cataloging, inventory, and research services to museums and archives. Eventually, the business thrived and now serves clients in 22 states. In the meantime, she pursued the book whenever she could.

Ten years later, through a chance encounter with an editor at Johns Hopkins University Press, Maines sent the manuscript there under the title The Vibrator and Electricity. When I asked Brugger if the tone in Maines' book is much different from other scholarly books in their technology series, he hesitated. "Rachel's stance is different. She uses her humor in a quiet way and, well, yes, her scholarly detachment is unlike a lot of our other authors." It was one of those moments in an interview when I knew the effusiveness I was looking for would not be forthcoming. Maybe scholarly editors just don't get effusive. Maybe they're too busy constructing theories and covering their asses. Maybe that's what makes Maines' book all the more amazing to me.

In The Technology of Orgasm, Maines takes careful aim at the historical, medical, and biological fields and blasts cannon-sized holes in what had once been a neatly sewn fabric of our history. She takes all of them to task as she reweaves the tapestry to revision a female orgasm that isn't treated as a disease. She traces the medical and economic genesis of the vibrator. And as a parting shot, she questions why the female orgasm has so little to do with procreation. And she does it with wit and precision and an arsenal of a bibliography. (The bibliography she first sent John Hopkins was 100 pages long. The published one is 50 pages long.)

"Her humor is definitely not typical of scholarly books," says Ruth Schwartz Cowan, a professor at SUNY Sunny Brook and a primary reader of Maines' book for Johns Hopkins; her own book More Work for Mother retells the story of household appliances from a female viewpoint. "Because she has a great command of her subject and she's a businesswoman, she has "perspective,'" Cowan says. "Her book is important, of course -- who would have guessed that 19th-century physicians were engaged in this enterprise? -- but Rachel can take a second humorous sight because she knows it's not the most important book."

Her mother may have taught her that intellectual freedom is worth fighting for, but somewhere along the way, Maines learned that it also required being smarter, quicker, and better-prepared than the people who are unwilling to question the status quo.

When I asked Maines why that high school incident with W.R. Robbins and her mother was so important, she thinks for a minute. "Because she defended my right to speak and she swatted him like a bug," she says. 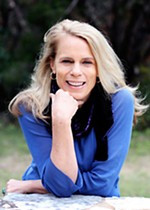 Evidence of Things Not Seen
Lindsey Lane's new novel of a missing boy and the lives he touches: an excerpt