But enough of that. Children's books open up so many other discussions, as American poet and critic Randall Jarrell observed with his typical prescience in a July 24, 1965, article in The New York Times. "I have trouble knowing what to do at parties. Prisoners tame mice, or make rings out of spoons: I analyze people's handwriting -- Pierre Emmanuel taught me, saying: 'It will help you' -- or else ask you to tell me what you read when you were a child. (People speak unusually well of the books of their childhood, don't they? Or is this one more life-giving illusion?) I love to see a hard eye grow soft over Little Women, or The Black Arrow, or Grandma Elsie -- yes, Elsie Dinsmore became a grandmother. And, I've found, there's no children's book so bad that I mind your having liked it: about the tastes of dead children there is no disputing." (Jarrell fans can rejoice at what is probably the best publishing decision of the year, the decision by HarperCollins to publish a collection of Jarrell's essays, No Other Book: Selected Essays, $27.50 hard, and Remembering Randall: A Memoir of Poet, Critic, and Teacher Randall Jarrell, $22 hard, by Jarrell's wife Mary von Schrader Jarrell.) 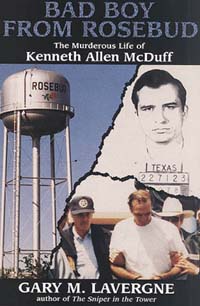 Austin author Gary Lavergne will be at Book People on Tuesday, August 10, 7pm, to read from his new book Bad Boy From Rosebud: The Murderous Life of Kenneth Allen McDuff (University of North Texas Press, $29.95 hard).

Austin's poetry slam team is seeking your donations and presence at a benefit for the team on Sunday, August 8, at Ruta Maya (Fourth & Lavaca) from 7-11pm as the team (Phil West, Vicky Charleston, Mike Henry, and Karyna McGlynn) prepare for this year's National Poetry Slam in Chicago, held August 11-14. Wammo, not a member of this year's team, will nonetheless be performing at the benefit and will travel to Chicago to compete as an indie slam poet. Slam fans can look for scores posted nightly from the nationals at http://www.poetryslam.com.