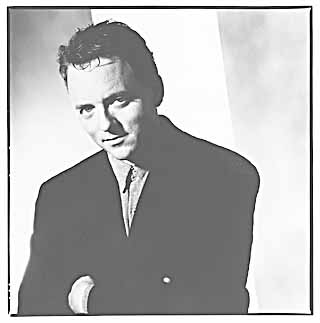 Dennis Lehane has published five mystery novels in a hard-boiled P.I. series set in Boston. The first one, A Drink Before the War, published in 1994, became an instant classic. Bibliophiles consider $100 and upwards a bargain price for a first edition. More importantly, Lehane's follow-up novels, Darkness, Take My Hand, Gone, Baby, Gone, Sacred, and the recently published Prayers for Rain (William Morrow, $25 hard) firmly proved that Lehane's dynamite debut was no fluke. This guy has the hang of the classic postmodern hard-boiled private eye thing. Read a bit of the opening chapter of Prayers for Rain, for example. You've got your cynical P.I., Patrick Kenzie, single but still carrying a torch for his knockout ex-partner, Angela Gennaro. There's the sidekick Bubba Rogowski, a somehow loveable thug who may have been a pit bull in his previous life. You've got your cranky pal at the Boston PD for doing small favors, and wiseguys aplenty. And then you've got Kenzie's new client, Karen Nichols, a gal so prim and proper she strikes him as "the kind of woman who irons her socks" -- and we mystery buffs automatically know that in P.I. novels, these are the women you can expect to slip a hand grenade in your jock strap (shades of Chandler's Little Sister).

Factor in the '63 Porsche Kenzie drives, the great local color we get from Boston (shades of Robert B. Parker, if you hadn't noticed already), and you feel right at home. But don't get too comfy just yet. Lehane's franchise may have a familiar, classic feel, but there's a turbocharged, soulful engine under the hood. The great scenes start rolling by back-to-back: There's a creepy tail-job to a cranberry bog that takes a sudden grotesque turn. Kenzie and Bubba accost a yuppie rapist, beat him up, and destroy his car, then Kenzie threatens to kill him and -- unlike all those other brooding postmodern Marlowes, you really believe him. These and other dark riffs aren't there just to scare you and keep you entertained; they're there to make you think. They're there because Dennis Lehane is definitely not just another mainstream mystery novelist. Besides being the real thing, he's a real writer.

Austin Chronicle:Tell me about Dorchester, the section of Boston your books are set in. What's it like, really, and how does it figure into your stories?

Dennis Lehane: Well, I grew up there, you know, born and raised. I didn't leave there until I was 20. It was the only world I knew. It wasn't until I left and lived in Florida a while that I realized what a rare sort of place that was. It was almost exclusively Irish and Polish, and children of immigrants. I was a short story writer mostly, and I found that my stuff was the strongest when I wrote about that sort of a world. And I also responded most powerfully to work set in that kind of world, Pete Dexter, William Kennedy's Albany novels. So I just began writing from that perspective. The Dorchester in these books isn't the Dorchester that exists now, but the way it was in the Seventies and Eighties. That was a conscious decision, to leave it as a sort of fictional world.

AC:How about the Boston mob scene? How much of that is real or based on fact?

DL: I grew up in an area that was a stronghold of the Irish mob. The head of the FBI's most wanted is a Boston Irish gangster, Whitey Balder, a guy who ran the Irish mob for 30 years. And he was also the brother of the Senate minority leader. It was an only-in-Boston situation. And then the Italian Mafia was pretty prevalent until they broke its back in '83, and they actually arrested a friend of mine's grandfather who it turned out ran the mob. And we had no clue.

AC:You've got some fairly dark undercurrents in your writing, including a vigilante streak. Prayers for Rain, for example, features a villain who preys on his victim's deepest fears, causing suicides, and various forms of self-degradation and havoc. Where does all that come from? 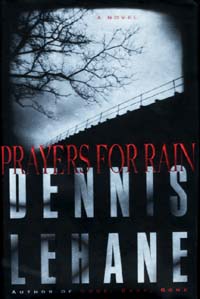 DL: I think it comes from the whole archetypal detective tradition. You know, the private eye is the guy who does the things that the cops can't. Prayers for Rain is about not being able to touch this guy because he's beyond the law, because he'd committed no real crime. And so the vigilante stuff in the end certainly comes up. But Darkness, Take My Hand, for example, is about the stupidity of vigilantism, how violence will always only beget violence, even if it takes decades.

DL: Well, that's a book in which there is absolutely no resolution. Everything they do leads to worse things. That was my baby, I was surprised they even published it, and then I was really surprised when it sold well. I knew when I wrote it that after people read it they would go, God, I feel like crap. And there were just hundreds of angry letters all over the Internet for months afterward. And it was interesting because there was one reviewer who really had a visceral negative reaction against the book when it came out, but at the end of the year called it the best book of the year. It had stuck with him. But that was a book in which, at the end, people were just totally drained. So I decided to switch moods, and I'm just gonna give them a lean, mean, fast thriller, not just kick everybody's ass.

AC:I hope this isn't a sore subject, but how do you feel about Robert Parker?

DL: Oh, no, he was a huge influence. I could never deny that. I think we're very different, though. The thing we share is that we both have a sense of humor.

DL: The last one in the original series, Butcher's Moon. I haven't read the new ones yet.

DL: I was a short story writer, and I was 24 and I was broke and I had all this time on my hands. So I sat down and wrote a detective novel and what do you know, it sold.

AC:You've got such a winning combination, it's easy to see why you've been successful. Now don't take this wrong, but did you sit down and think about the commercial angle before you started writing?

DL: Honest to god no, I just wrote what I wanted to write. You have to understand that, when I wrote the first book, I had no expectation, or even much desire, that it was gonna get published. I just wrote it.

AC:Do you drive a Porsche?

DL: Well, no, those guys are older than me (laughs). Actually, if I could have any dream car it would be a Shelby.