Tweet
print
write a letter
Austin graphic designer Nick Newton and Dallas Morning News reporter (and The Sporting News contributor) Bill Minutaglio have crafted what must be the definitive book on superstition in sports with Locker Room Mojo (Middlefork Press, $32.95 hard). It reads like an athletic News of the Weird, though it's perhaps more palatable and presented in a highly engaging coffeetable book format. Here's a sample: "One day during the New York Yankees' 1930 season, Babe Ruth arrived at the ballpark with bloodshot eyes after a strenuous night. He asked the trainer, 'Watcha got to clear my eyes?' The trainer handed him a bottle of eye wash. Ruth put the wash in his eyes. He had three hits that day. The next six days, whether he needed it or not, Ruth used the eye wash and he made a hit everyday. Then he went hitless. Teammate Tony Lazzeri, who had been watching Ruth's treatment, bought a bottle of eye wash, emptied it, rinsed it and filled it with water. Then very conspicuously in front of Ruth, Lazzeri drank the whole bottle. Ruth guffawed, 'Look at the dumb guy,' he said to the whole locker room, 'he drinks the eye wash.' That day Lazzeri got three hits. Ruth was impressed. The next day he got a bottle of eye wash from the trainer, downed the contents and remarked to Lazzeri, 'Sure tastes terrible, doesn't it, Tony?' But the Babe's batting streak resumed, and he continued to drink the eye wash before every game as long as the string lasted." Newton will be at Barnes & Noble Westlake on Wednesday, June 9, 7:30pm, to discuss and sign Locker Room Mojo. 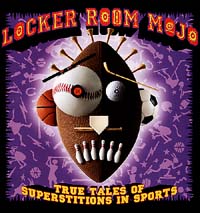 BookWoman is celebrating local writer sharon bridgforth's win of a Lambda Literary Award for Best Small Press Book for her collection of poetry, the bull-jean stories, on Wednesday, June 9 at 7pm.

Barnes & Noble Guadalupe hosts a panel discussion about reform in the state hospital system with David B. Pharis, editor of State Hospital Reform: Why Was It So Hard to Accomplish? on Wednesday, June 9, at 7pm.

Horton Foote is coming to Book People on Monday, June 14, at 7pm to sign his new book Farewell: A Memoir of a Texas Childhood.

Dennis Lehane, author of Prayers for Rain, a new, dark, hard-boiled detective novel, will be at Adventures in Crime & Space on Monday, June 14, 6-8pm.

Yorktown author Cindy Bonner reads from and signs her latest novel Right From Wrong on Thursday, June 17, at Book People at 7pm.

A new anthology, A World Between: Poems, Short Stories, and Essays by Iranian-Americans, has its origins in Austin, and the editors and some of the contributors -- Persis M. Karim, Tara Fatemi, Zjaleh Hajibashi, Nika Khanjani, and Reza Shirazi -- will be at Book People Thursday, June 24, 7pm, to read selections from the anthology.