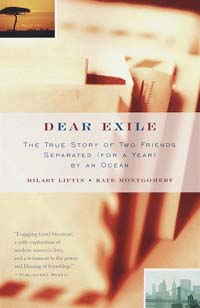 by Hilary Liftin and Kate Montgomery

This delightful book contains the correspondence of college roommates and best friends Hilary Liftin and Kate Montgomery, during the year Kate and her newlywed husband Dave spent in Kenya with the Peace Corps. The wicked pleasure of reading someone else's mail reaches new heights here, as both women are such engaging writers: funny, original, and vibrant. With Seinfeldian irony, Hilary chronicles the trials and tribulations of a single career girl in New York City: dates, office politics, wacko neighbors. Kate sends back sad and shocking updates from a deathly deprived African village which she nonetheless grows to love, with humor that almost never fails her, except when describing the cruel, violent sham that is the Kenyan school system. Even the Postscripts, which hint at how the friendship changed after Kate came home, add to the textured and true portrait of what friendship can mean and be in our lives. All the time I was reading it, I couldn't wait to get in bed each night to hear more. --Marion Winik

Four Generations in the Life of a Vietnamese Family

Duong Van Mai Elliot begins her uniquely inside view of Vietnam with her forefathers' lives. Her great grandfather, Duong Lam, a scholar and poet, passed a rigorous examination to serve as mandarin for the emperor and, after 1873, the French colonialists. He delicately balanced Vietnamese discontent and opportunistic cooperation with colonial rule. He sought to control insurgency and supported European-style education as preparation for eventually overthrowing the colonialists. For his efforts, the French gave him a medallion, which he diplomatically accepted and disdainfully hung in the pigsty. The author came of age in 1950s Saigon among growing American influences, and, after earning her bachelor's degree at Georgetown University, she returned to Vietnam in 1963 to witness the violent overthrow of Diem and the escalating American involvement. Many books have been written about the American experience in Vietnam, but few have understood the gripping perspective of the Vietnamese. The Sacred Willow is the Vietnamization of Vietnamese history. --Mason West

In the midst of this beautiful new Rabindranath Tagore anthology, there is a chilling photograph of the celebrated Bengali poet with Albert Einstein. Shoulder-to-shoulder they look, with their simultaneously faraway and piercing stares, exactly like wild-haired twins, reunited late in life. This approximates the point of Tagore's writing: We all spring from and return to a single, eternal source. This anthology, which includes everything from Tagore's play The Post Office, about a dying boy cooped up in a house (which was performed often during WWII, including at a concentration camp in a Warsaw ghetto orphanage), to his near-sacred poetry. Tagore's life was epic in and of itself, as he hobnobbed with intelligentsia throughout Europe and America as well as in his native India, dabbled in painting and extremist politics, and eventually won the Nobel Prize for Literature in 1913. Throughout both his work and life, both of which are attested to expertly in this anthology, there reigns a compelling, heartfelt desire to know the Great Unknown. --Ada Calhoun

by Josie Lloyd and Emlyn Rees

Meet Amy and Jack, twentysomething Londoners in love. Meet their puppeteers, Josie Lloyd and Emlyn Rees, who write alternate chapters of this romantic comedy from her perspective and his. Is that adorable or what? Come Together, a bestseller in England, has been compared to the irresistible Bridget Jones's Diary. The comparison is inapt: This novel labors for nimbleness and gasps after effervescence. Appallingly shallow, Amy and Jack do not endear. She tells one unfortunate suitor that the fact he likes her "must mean I'm on the same kind of level of attractiveness as [you]. And that makes me want to off myself." Briefly remorseful at his devastation, Amy then remembers, "Fortunately, because no one speaks to Geoff, he doesn't have anyone to bitch to." Whew! Many painfully contrived obstacles later ("accidental fellatio," anyone?), the pair grow more human. "Toptastic!" as Amy would say, but too late. Now Lloyd and Rees anticipate a Come Together screenplay and their own impending nuptials. Wish them well, but skip their romance. --Katherine Catmull

Local bestsellers are based on recent sales at Austin bookstores selected to reflect varied reading interests. This week's list of bestsellers is from Resistencia Bookstore, 603 W. Live Oak.

1. The Making of a Chicano Militant: Lessons From Cristal by José Angel Gutiérrez

2. The Bull-Jean Stories by Sharon Bridgforth

5. Loving in the War Years by Chérrie Moraga

7. East of the Freeway by raúlsalinas

8. Speaking for the Generations: Native Writers on Writing edited by Simon Ortiz

10. In the Spirit of Crazy Horse by Peter Mathiessen