By the Shore: A Novel

is as lovely and understated as its author's name is ostentatious.

By the Shore is narrated by 12-year-old May, a reflective, serious English girl who at the tale's outset has recently moved from London to the coast with her single mother Lucy and six-year-old brother Eden. The three live in a financially struggling bed-and-breakfast run by Lucy, whose attempts to balance fun with motherhood often leave May feeling abandoned. May longs for things she believes will complete her -- popularity in school, her absent father, and the childhood sense of wonder she is beginning to lose. When Rufus, a sensitive writer from London, comes to board at the inn, May's world is upset further. Jealous of the carefully budding romance between her mother and Rufus, May engages in subtle sabotage of their relationship. By the time her father comes to visit for the Christmas holidays, May's wish list for a better life appears to be met: She's been invited to a party by the popular girls, her father is back, and Rufus is returning to London.

The stage is set, of course, for the coming-of-age story epiphany, and it arrives on cue. The party with the popular girls isn't fun and neither is Lucy, who is miserable about Rufus' departure and the irresponsible antics of May's playboy father. The final events, and May's accompanying self-awareness, unravel in a predictable manner, but the novel's sweet, compassionate tone leaves you hanging on every word anyway. Indeed, the strength of this story lies in the way it is told. Rarely has an author captured the thoughts and emotions of a painfully sensitive, precocious adolescent girl so well.

The book does have a weak point, and again, it is a common one to this type of novel: Occasionally May's thoughts seem too mature for her age. The observations are too true, too poignant, too haunting; how could they come from someone who hasn't even hit puberty? After a while, however, it just doesn't seem to matter: You're so swept away by the the voice you simply don't care who's behind it. -- Jessica Berthold

Galaxy Craze will read from and sign By the Shore at Barnes & Noble Guadalupe on Wednesday, May 5 at 7pm.

by the editors of The Onion 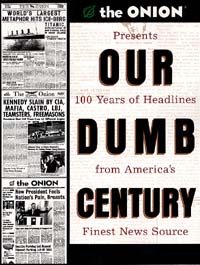 There's a newspaper legend that goes like this: A small group of writers, employed at the Times of London seven decades ago, staged a secret prank. They wanted to see who among them could successfully submit that newspaper's most absurd headline. The winner: "Small Earthquake in Chile, Not Many Killed."

A straight line can be drawn from them to two Wisconsiners -- Scott Dikkers and Pete Haise -- whose parody newsweekly The Onion, in print and online (http://www.theonion.com), currently stands alone as the Web's most irreverent site. In fact, The Onion does satire so well that last year, after Disney subsidiary Hyperion reneged on printing Our Dumb Century, the book rights' re-auction instantly fetched a new, six-figure advance. "In the 18 months between deals we grew, and so did The Onion's value to publishers," says senior editor Rob Siegel. "Suddenly, we weren't just a midlevel title." According to Siegel, several Onion contributors have turned up on the staffs of The Late Show With David Letterman, The Daily Show, Space Ghost Coast-to-Coast, and Buffy the Vampire Slayer.

Our Dumb Century is a terrific news parody that ranks among the best in years. This is good news for anyone who loved National Lampoon in its heydey, or the lamented SPY magazine. The book is loaded with meticulously designed, front-page reprints of "back issues," complete with headlines, stories, and photos of dubious recounts of familiar American events. A headline from April 16, 1912, reads, "World's Largest Metaphor Hits Ice-Berg," and the page, complete with Titanic photo and various subheads (including "Stewards Kindly Ask Third-class Passengers to Drown") looks and feels authentic. Even the advertisements ("Why doesn't YOUR Home Have a Smokestack?") mimic the various periods of 20th-century newspaperdom -- from McKinley to McPaper.

A sampling of the 176-page tome's headlines:

"Surgeon General Warns Against Smoking Any Cigarette Other Than Chesterfields" (1946)

Tasteless? Oh, yes. This material is unsuitable for prudes, which is about the worst one can say about it. This book will make your stomach hurt. Our Dumb Century is that good. -- Stuart Wade

Playing for Keeps: Michael Jordan and the World He Made

With Playing for Keeps: Michael Jordan and the World He Made, all-world journalist and historian David Halberstam tries his hand at writing a biography of the famed basketball player. Halberstam attempts to understand what it is that created not only Michael Jordan the man, but the international marketing sensation of "Michael Jordan Inc." What Halberstam makes clear is that Jordan was the right man for the right time.

Jordan is arguably the best basketball player of all time, but even acknowledging that, his timing was just as good as or better than his ability. Halberstam notes that just as Jordan entered the league, David Stern took over the NBA and was working to make it into the giant it is today. The advent of cable television changed the sports world, and basketball was the first sport to take advantage of it. Halberstam paints a picture of a racist American audience that didn't gravitate to the NBA because it was perceived as "too-black."

Companies stayed away from basketball, and sponsorship was hard to find. Michael Jordan was the answer to these problems. His handsome, smooth demeanor was nonthreatening and appealing enough that fans and corporations like Coke and McDonald's eagerly flocked to him. Jordan was the epitome of the image Stern wanted to project for the league.

Halberstam has said that his books are not true biographies, but rather mini-biographies -- small biographies of several interconnected people -- and certainly this is true of Playing for Keeps, but that may be because Halberstam never interviewed Jordan. That's right; the subject of the book isn't quoted in the entire work. Halberstam argues that this makes his book better, allowing him to focus on the full story of Michael Jordan. In any event, the people that have surrounded Jordan throughout his career are often more interesting than Jordan himself. His two primary coaches, Dean Smith at the University of North Carolina and Phil Jackson of the Chicago Bulls, are portrayed as polar ends of the coaching spectrum. Using religious metaphors, Halberstam contrasts Smith's strict Calvinism to Jackson's Zen Christianity. While leaving Jordan out of his own book leaves a gaping hole, the change in direction it forces the author to take creates an interesting story about a uniquely American phenomenon.

Halberstam's writing style is more suited to an economic analysis of contemporary Lithuanian market strategies than to sports journalism. When describing Jordan's arrival on the UNC campus, Halberstam writes, "Barely enrolled in school, he was telling upperclassmen in team pickup games that he was going to dunk on them." The world of the NBA is a world full of slang, and Halberstam has decided to abstain from that colorful language. He's a member of the Society of American Historians and writes like it. If you can get past the language, Playing for Keeps just might reveal something to you about a tricky triple alliance: fame, money, and competition. -- Rod Machen